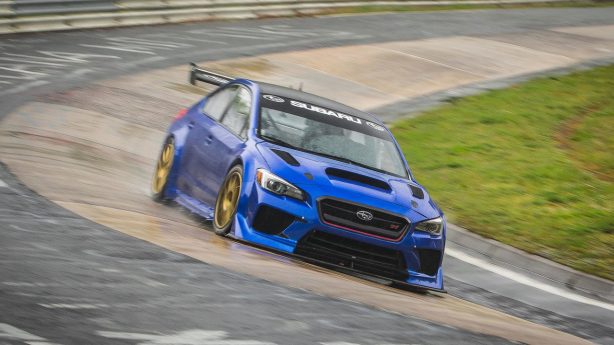 Subaru has been on a teasing spree lately, started off with this GT-winged BRZ and now a heavily tuned WRX STI.

But unlike the mysterious BRZ’s single shot of its towering carbon fibre STI wing, the modified WRX STI was revealed in all its glory in a full 2-minute video, showing footages of the car undergoing testing at the Silverstone circuit and the Subaru motorsport team performing final tweaks.

The completed car was then shown to arrive at the infamous Nurburgring circuit in Germany for more testing followed by a lap record attempt or some sort.

It seems that Subaru may be attempting to set a world record around the Nurburgring with this bespoke WRX STI which looks essentially like a race car complete with widened wheel arches, minimal ground clearance, carbon fibre roof, large rear diffuser and GT wing, full roll cage, racing seats and racing harnesses.

The car is called the WRX STI Type RA NBR Special. The RA badge has appeared on many previous WRX models and stands for “Record Attempt” or “Rally Applicant”, in this case it’s most likely the former. The NBR acronym is no doubt referring to the Nurburgring.

Subaru will unveil more details on the WRX STI Type RA NBR on June 8 and quite possibly also unwrap the speculated BRZ STI on the same day. In the meantime check out the teaser video below.