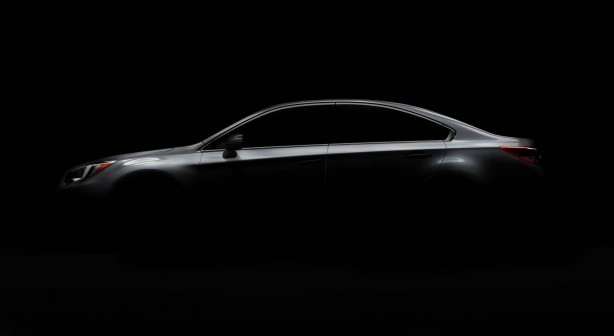 With the new-generation Subaru Legacy (Liberty in Australia) just round the corner, Subaru has released the first teaser image of 2015 Legacy.

Scheduled to make its public debut at the Chicago Auto Show, the company said the new model will have a “more coupé-like profile with a faster windshield rake angle and narrower A-pillars that create a sporty and modern sedan.”

It will likely share substantial design cues with the recently release Subaru Levorg wagon. There are no words yet on the car’s engine options but expect the current engine lineup to be carried over. These include a 2.5-litre four-cylinder with 129kW and a turbocharged four-cylinder delivering 186kW. Subaru’s symmetrical all-wheel drive will also feature.