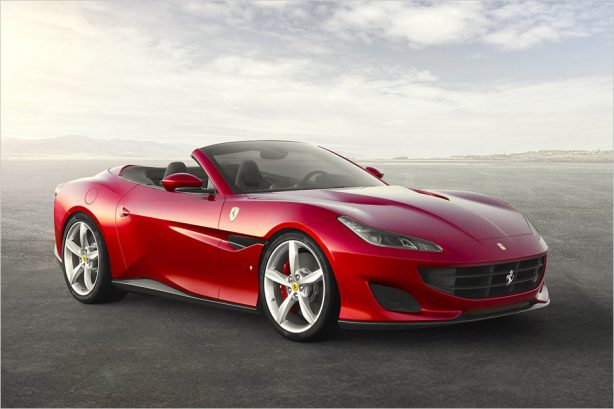 The all-new Ferrari Portofino has been unveiled as the new entry-level model for the prancing horse brand, replacing the California T launched in 2008. Set for debut at next month’s Frankfurt Motor Show, the drop-top Portofino is more powerful and faster than its predecessor, backed by sleeker and more elegant styling.

While no details have been given about the future of the California nameplate, Ferrari’s new moniker for its latest convertible references one of Italy’s most beautiful coastal towns. Portofino is renowned for its charming tourist port and, over the years, has become synonymous with elegance, sportiness and understated luxury.

Already confirmed for Australia and launching in early 2018, the Ferrari Portofino sits on an all-new lightweight platform which the company claims is more rigid yet lighter than that of the California. Ferrari says the Portofino combines the advantages of a retractable hard top, a roomy boot and generous cockpit space plus two rear seats suitable for short trips. 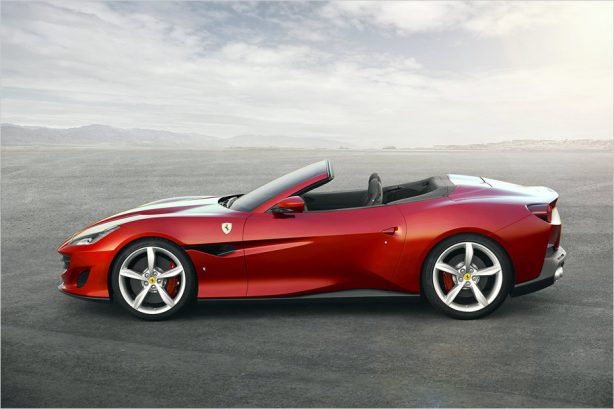 The new front-mounted V8 turbo features new pistons and con-rods, and a new intake system design. The geometries throughout the exhaust system have also been revolutionised, with the new one-piece-cast exhaust header redesigned to reduce losses and turbo lag. These improvements, combined with the Variable Boost Management which adjusts torque delivery to suit the gear selected, are said to enable the Ferrari Portofino to offer even higher levels of acceleration in all gears and lower fuel consumption compared to the outgoing model.

Ferrari makes no mention of the transmission used in the Portofino, but the seven-speed dual-clutch unit from the California is likely to have been carried over. Like before, drive continues to be channeled to the rear wheels.

For the first time in a Ferrari GT, the third generation electronic rear differential (E-Diff3) has been adopted and integrated with the F1-Trac dynamic management system, improving both mechanical grip and the control of the car on the limit. The Portofino is also the first GT in the range to be fitted with EPS (Electric Power Steering). This allowed the engineers to reduce the steering ratio by seven per cent for even more responsive steering without a trade-off in stability thanks to the integration with the E-Diff3.

The magnetic damping system (SCM-E) has been uprated with dual-coil technology which according to Ferrari, helps reduce roll while simultaneously improving absorption of road surface unevenness. It’s claimed to offer an even more dynamic, responsive car that also delivers superior ride comfort. 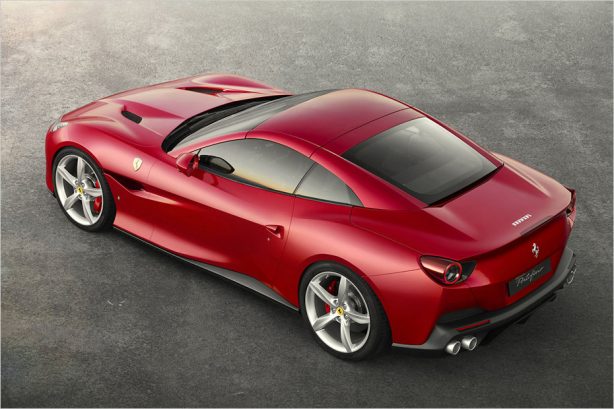 Penned in the Ferrari Design Centre in Maranello, the Portofino’s styling is a two-box fastback configuration which the company says is unprecedented in a coupé-convertible with a retractable hard top. It adds extra sleekness to its silhouette, lending it a sportier character without impinging on its elegance and dynamism.

There was close collaboration between the Aerodynamics department and Ferrari Design during the Portofino’s design stages to ensure maximum efficiency in the development of the surface treatment. Starting with the front, the form of the large radiator grille opening, that stretches from edge to edge of the carefully contoured nose, is underscored by a new full-LED headlight assembly with a more horizontal shape. The outside edge of the headlight hides an innovative air intake which vents into the front wheelarch and exits along the flank to reduce drag.

At the back, the taillights have been placed further apart to emphasis width, while the retractable hard top features a more lightweight design and can be raised or lowered at low speeds. 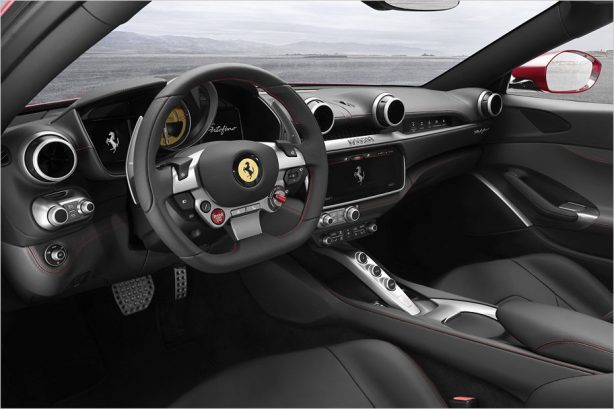 There is also a particular focus on interior comfort evident by a slew of new features, not least an infotainment system with 10.2-inch touchscreen display, a new air-conditioning system that improves occupant comfort both with the top up or down, a new steering wheel, 18-way electrically adjustable seats with a new backrest design that boosts legroom for rear seat passengers, and the passenger display.  The new wind deflector which, when the top is dropped, is said to cut air flow inside the cabin by 30% while reducing aerodynamic noise.

Pricing for Australia is yet to be announced, but expect it to be similar to that of the California T which goes for $409,888 plus on-road costs.

Ferrari has lifted the lid on not only its first plug-in hybrid, but also its …