Launched in 2014, the Lexus NX has been one of the best-selling models in the premium brand’s line-up, exceeding its sale targets in many markets globally, including Australia.

For 2018, the NX compact crossover has been given a top to bottom refresh, including exterior and interior updates as well as handling improvements.

The front fascia of the new NX has received a major redesigned, with the upper portion of the spindle grille and the front bumpers restyled to more smoothly blend into the bonnet and front doors, an update Lexus says results in a sleeker overall shape and better aerodynamics.

Flanking the new grille are triple projector L-motif LED headlights similar to those equipped on the Lexus LC flagship coupe. Additionally, satin and smoked chrome trim pieces have been applied to the grille treatment.

“Starting at the spindle grille, the way the front edges connect to the front fenders results in a much bolder expression than before, clearly highlighting the NX’s style design architecture,” said the NX’s Exterior Designer, Shin Kamiura from the Lexus Design Division. “We’ve also changed the shape of the lower front bumper to better support the spindle grille, as well as relocated the fog lamps to the corner of the front bumpers, separating them from the ducts. The result is a front fascia with a stronger and more aggressive presence.”

The 2018 Lexus NX also sees an updated rear end, where the lower rear bumper cover now involves elements of the grille’s spindle motif, and has been broadened to enhance the vehicle’s wide stance and low-center-of-gravity look. Further up the SUV, the NX’s revised taillights have been elongated, and the black garnish has been revised to better emphasize the “L”-shaped lenses.

For a sportier look, the new NX features larger chrome-tipped exhaust tips that are integrated into the crossover’s revised bumper cover design and new rear underbody spoiler. For the NX Hybrid variant, a slotted sectional piece with an L-shaped satin chrome border blends into the underbody spoiler.

For the wheels, a new aluminum 18-inch wheel has been added to the mix, combining a bright machined-finish with dark metallic paint to express a “three-dimensional design with an increased sense of depth”.

The interior of the new NX has also been slightly reworked with highlights including a larger 10.3-inch central display, redesigned and simplified aircon controls including four easy-to-operate toggle switches adorned with a tiny “L” on their surface, larger and updated analogue clock, new metallic satin finish for most controls and a larger wireless phone charger to accommodate larger smartphones. 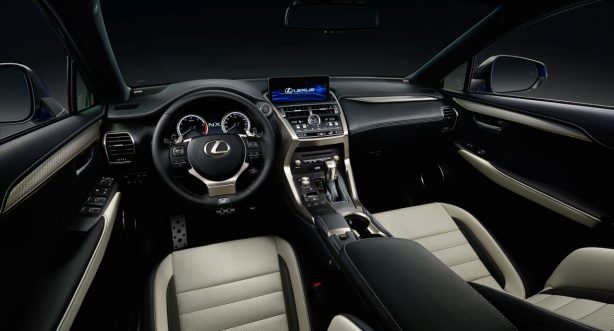 Powering the NX 300—formerly called the NX 200t—is the carried over turbo 2.0-liter inline-4 petrol engine, while the NX 300h’s hybrid drivetrain continues with a 2.5-liter four-pot combined with a pair of electric motors. For the new update, both drivetrains offer a richer, sportier engine sound and exhaust note that is reproduced through the speakers by Lexus’ Active Sound Control (ASC).

While the NX’s straight-line performance will essentially remain the same, improvements have been made to the SUV’s suspension tuning to enhance ride and handling. The springs, stabiliser bars and bushings have been retuned for improved turn-in response and steady-state cornering. Elsewhere, new shock absorbers further improve ride quality. But the biggest new change to the NX’s chassis is the Adaptive Variable Suspension (AVS), now based on the advanced system found in the LC 500, which offers a range of up to 650 instantaneous compression and damping adjustments (up from 30) for enhanced control and overall handling stability.

The new 2018 Lexus NX is expected to arrive into Australia in Q3 this year with local pricing and specification announced closer to launch.