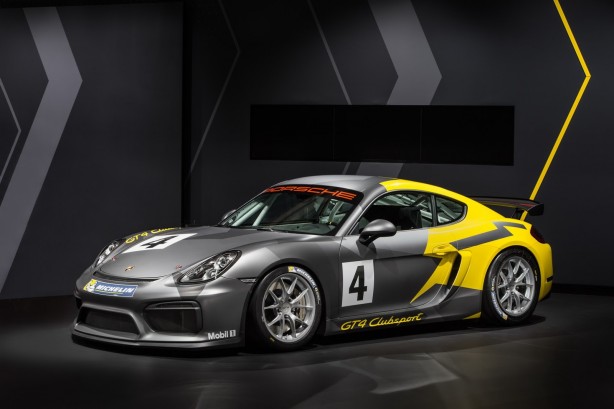 The GT4 Clubsport is powered by the same 3.8-litre flat-six engine found in the road legal GT4 and is similarly positioned behind the driver seat. The engine’s output remains unchanged from the road legal version (283kW), however unlike the former with a six-speed manual, the Clubsport embraces the double clutch transmission.

The chassis on the Clubsport has also been upgraded with both the front axle and lightweight rear strut suspension being borrowed from the racing GT3 Cup edition. Porsche haven’t skimped out on the brakes either having included 380mm steel brakes all around. The front features a one-piece, six-piston aluminum caliper and the rear sporting four-piston units.

Owners are given an unprecedented level of configurability with even the ABS having 12 stages of adjustability. The Clubsport rides on 18-inch forged rims wrapped in Michelin tyres and also comes with a welded-in roll cage. The racing bucket seats also come standard with a six-point harness. The car just tips the scales at 1,300kg.

Currently the GT4 Clubsport is only available in Europe. The base model starts at $110,000 euros.