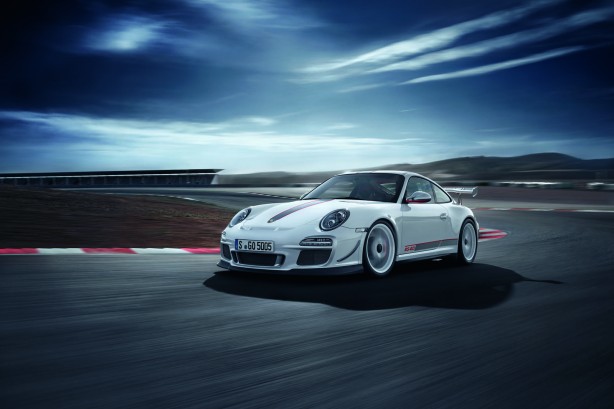 Porsche has released the first official images and details of the limited-edition GT3 RS 4.0. The lightweight track rocket with 368kW of power is fitted with the same 4.0-litre engine as Porsche’s GT3 RSR race car. In other words, this is as close as you’ll get to a road legal 911 race car – a fitting farewell to the 997 series 911.

The GT3 RS 4.0 is 10kg lighter than the already trim GT3 RS, weighing in at only 1,360kg, courtesy of thin bucket seats, lightweight racing suspension, carbon fibre front wings and bonnet and plastic rear windows. Although more expensive than a standard 911, the car does without sat-nav, radio or air-conditioning, all in the quest to reduce weight. 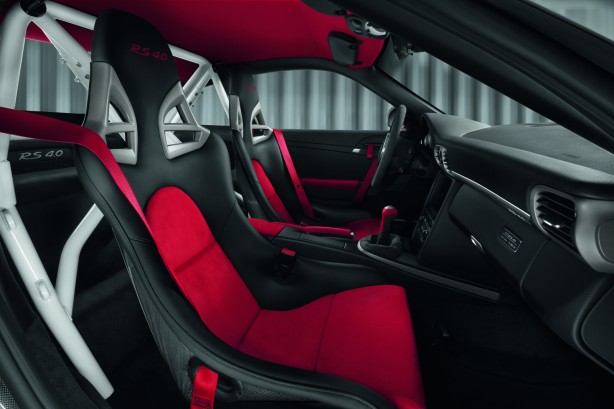 Porsche has also made a few aerodynamic tweaks to the new front bumper, which incorporates small turning vanes mounted on either side of the car. They called these ‘flics’ and they help to increase down force at the front end. In combination with the rear wing, they push the car onto the road with an additional 190 kg of aerodynamic force at top speed, producing better grip through corners.

Visually, the RS 4.0 can be spotted by its unique Carrera White paint job with grey and red stripes. It also comes with special ‘RS 4.0’ badging and decals. The red and grey theme is repeated in the lightweight cabin, which comes standard with Porsche’s Clubsport package, comprising a roll cage, seatbelt harnesses, a fire extinguisher and a battery cut-off switch.