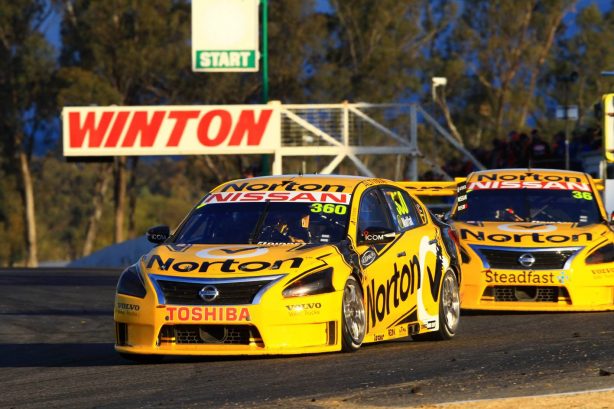 Nissan put itself on the V8 Supercars map at Winton Motor Raceway on the weekend, claiming its first race win in its return season to top-level Australian touring car racing.

James Moffat took his and the Nissan Altima’s first race win in the V8 Supercars Championship on Saturday – the first Australian Touring Car race win for Nissan in 21 years.

It was the first time that Nissan has won an Australian Touring Car Championship race since Mark Skaife led home team-mate Jim Richards in the mighty Nissan GT-R (R32) at Oran Park on 21 June 1992.

The win came after a strong qualifying performance that saw Caruso claim second place on the grid behind three-time series champion Jamie Whincup. The qualifying result was a personal best for Caruso. Moffat started the race from third. 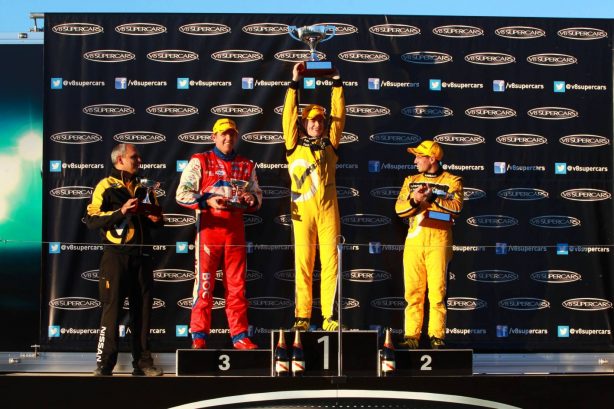 Whincup led the opening stages of the 40-lap 60/60 Super Sprint race, only to suffer a mechanical problem early on.

Caruso led the first home in the first part of the race, but at the re-start Moffat got the jump and led the remaining 20 laps.

Sunday’s two races were not as fruitful for Nissan Motorsport, but the encouraging signs remain for the squad as it heads towards the all-important endurance races at Sandown, Bathurst and the Gold Coast.

Moffat continued his good form, finishing 11th and eighth and moving up to 13th place in the championship – the highest of the four Nissan Altima drivers.

Michael Caruso failed to finish both races after being taken out in separate incidents – the second of which was a clash with Craig Lowndes while running 10th. 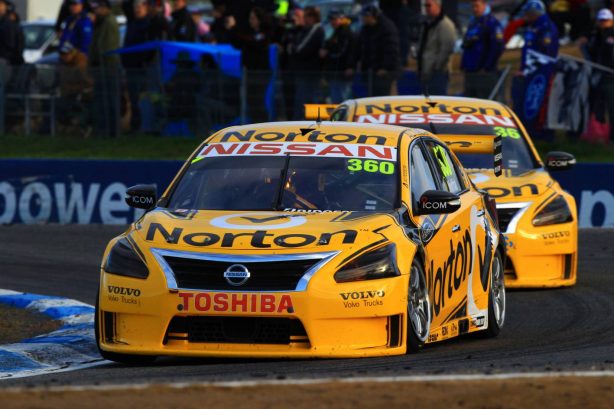 The incident saw Caruso spear into the fence with three corners of the race remaining. Lowndes was later penalised 25 championship points for his part in the crash.

Todd Kelly took a best of 14th place, but had his weekend spoiled by a clash with the wall after contact with Jamie Whincup.

Rick Kelly finished 14th and 22nd in the first two races of the weekend before an incident with Mark Winterbottom saw him fail to finish the third race as a result of rear suspension damage.

The next event of the V8 Supercars Championship will be the first of the 2013 endurance races – the Wilson Security Sandown 500 on September 13-15. 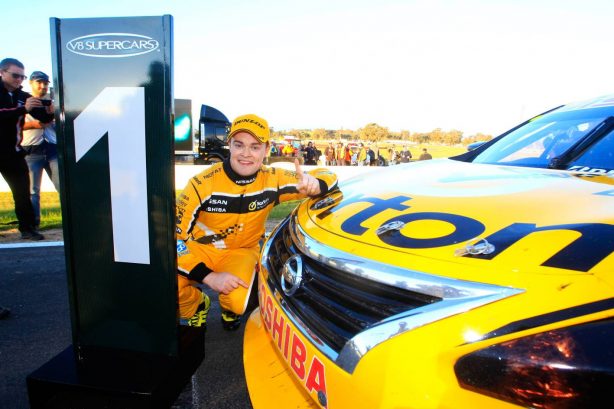 “I’ve worked hard to get to this point in my career and to breakthrough for my first win means a lot,” said James Moffat.

“What a great day for everyone at Nissan Motorsport, Norton and Toshiba. It’s all a bit of a dream at the moment.

“I really tried to come into this event without many expectations. Naturally, if we were going to go well at any circuit, this was the one. It’s our test track, and I was very happy with the way we ended our test day, but I wasn’t getting carried away, because we know how finicky this track can be.

“I wasn’t prepared to get too far ahead of myself, and even when we were quickest yesterday, I was keeping a lid on it.

“This result speaks for itself. We’re one-two in both races. Sure, Jamie had a bit of bad luck, but both of us proved we had great pace.” 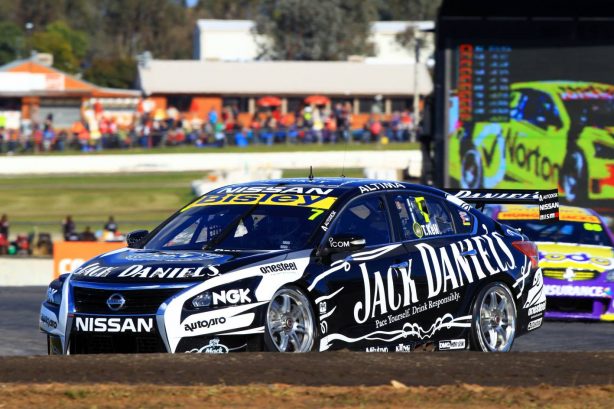 “We knew we’d come into this event looking better than we have in the previous rounds. We’re all wise enough to know that this circuit has no advantage for the cars with big horsepower. The Nissans have been handling really well and we’ve shown that throughout the year.

“It’s a credit to everyone at the team, and our engineering guys are working hard and it’s paying off.”

“It’s a little bit of a dream come true, we’d love for the JD cars to be up there, but for the Norton Nissan to achieve that when we still are a bit slow in a straight line is absolutely incredible,” said Rick Kelly.

“We knew coming into this weekend it was about qualifying and those two guys nailed that part of it and were able to do consistent laps in the race and get the reward for doing that.

“A huge congratulations to the whole team, the last 18 months for us have been extremely tough, the guys with their families and everything with the workload has been tough on everyone, so congratulations to everyone in the team and thanks for the effort, because today it paid off.”

“Well done to the boys. We always knew if we were going to have a chance it would be here. We’ll try and get a bit of momentum out of this for the rest of the year.”