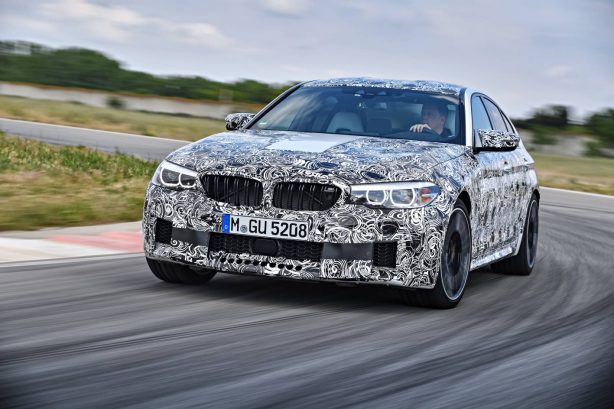 The next-generation BMW M5 will be the first all-wheel drive equipped M car when it arrives early next year. The German car maker today confirmed via press release that the sixth-generation of its midsize performance flagship saloon will offer better traction and a richer dynamic experience through the new all-paw set up. an approach also undertaken by the recently released Mercedes-AMG E63.

But before you think the days of heavy-smoking sideways drifting M5s are gone, afraid not, as all the driver has to do in the new model is press a button in a certain driving mode to switch from AWD back to rear-wheel drive. Yup, no tricks no gimmicks, pure rear-wheel drive at anytime, just like the same function that is available on the latest E63 by pulling the paddle shifters simultaneously.

Both the BMW and Mercedes bahn-stormers are first timers to the world of AWD, making them now a much closer match to the AWD veteran Audi RS6 when the surface becomes tricky. 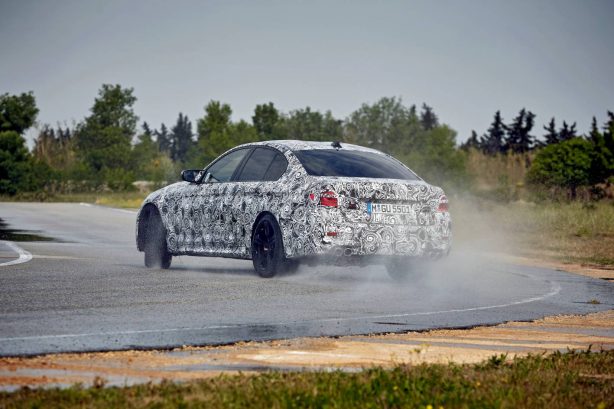 Equipped with BMW’s M xDrive all-wheel drive system, the new M5 allows the driver to choose from five different configurations based on combinations of the DSC modes (DSC on, MDM, DSC off) and M xDrive modes (4WD, 4WD Sport, 2WD). The latter varies the torque distribution from a neutral front to rear torque split (4WD) and rear-biased set up (4WD Sport) to a full rear-wheel drive configuration just like the previous M5.

An Active M Differential is responsible for distributing the drive between the rear wheels, with a locking effect that can vary between zero and 100 per cent, as the situation demands.

“The core component of M xDrive is a central intelligence unit with M-specific software delivering integrated control of longitudinal and lateral dynamics. The new drivetrain technology – making its debut on the new BMW M5 – therefore combines all of the agility and precision of standard rear-wheel drive with the supreme poise and traction of the all-wheel-drive system,” explains Frank van Meel, Chairman of the Board of Management of BMW M GmbH. “As a result, the new BMW M5 can be piloted with the familiar blend of sportiness and unerring accuracy on both the race track and the open road – and in various weather conditions, too.” 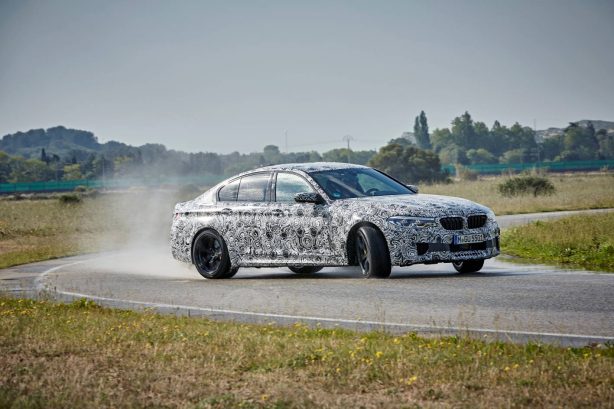 The new M5 will continue to be powered by the carmaker’s biturbo 4.4-litre V8 petrol engine tweaked to deliver around 458kW, eclipsing the AMG E63 S’ 450kW and Audi RS6’s 445kW. The new V8 will also surpass the 448kW V12 used in the BMW M760iL, toppling it to become the brand’s most powerful production engine. However, it remains to be seen if the M5 can beat the Merc’s 850Nm and Audi’s 750Nm in the torque numbers game.

Paired with a new 8-speed automatic gearbox with “incredibly short shift times”, the M5 super sedan is claimed to rush from 0-100km/h in under 3.5 seconds.

The 2018 BMW M5 is expected to debut in September at the Frankfurt Motor Show, with pricing and Australian specification details released closer to launch in early 2018.