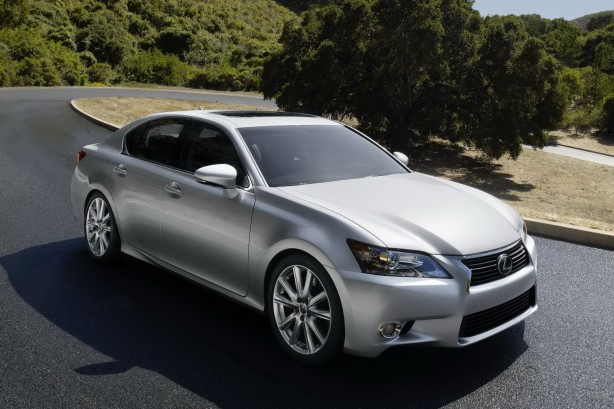 It’s here! The all new 3rd generation Lexus GS saloon made its world debut at the Pebble Beach Concours d’Elegance in California.

First revealed as the LF-Gh concept at the New York Motor Show earlier this year, the new GS breaks with Lexus tradition by sporting bolder styling. Key to this is the ‘in your face’ trapezoidal grille that the company says will be the new face of all future Lexus models. The new grille is flanked by a pair of deep-set headlamps with distinctive ‘Nike-tick’ LED daytime running lights.

The new GS will take on the recently released Audi A6 as well as the Mercedes-Benz E-Class and BMW 5-Series. The car sits on a new platform that is more rigid, a result of increase number of sport welds as well as laser welds in specific areas.

It is suspended on new suspensions which feature aluminium upper, and lower control arms for reduced unsprung weight and an updated rear subframe that supports a new multilink suspension. 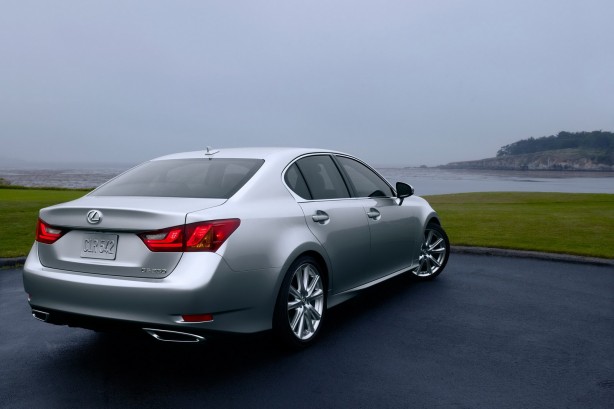 The new GS also has wider tracks than its predecessor, up 40mm at the front and an extra 50mm at the rear. It features new shock absorbers with lighter-viscosity oil, enabling faster response to small driver inputs. The brakes are ventilated all around with four-piston callipers up front.

The European markets will get an entry level GS250, which presumably shares its engine with the IS250 (Lexus hasn’t revealed any specific details yet), and a GS450h hybrid. Whilst the US line up will comprise of the GS350 and the GS450h. The Australian market cars will likely mirror that of the US.

The Lexus GS350 is also available in both rear-wheel and all-wheel drive, albeit the latter is only offered in certain markets. According to Lexus, the optional electronically controlled all-wheel-drive system can vary torque distribution between front and rear wheels from 50/50 to as much as 30/70, depending on driving conditions.

Packaging in the new car is also a big improvement, although dimensions are almost identical to the outgoing model. There is more space in the cabin and boot capacity has increased by 25%. The designers have also worked on the doors openings to provide easier entry and exit. Together with the redesigned seat frame and steering column, the new Lexus GS promises better visibility as well as increased comfort. 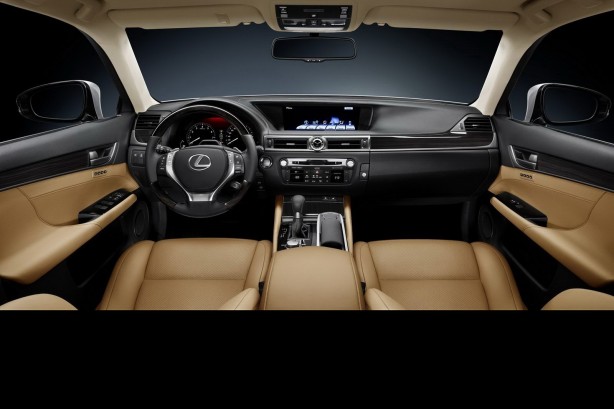 The most striking feature though is the car’s new dashboard. Drawing inspiration from the LF-A supercar, it is modern and beautifully laid out and is a great departure from the old car’s conservative dash. The analogue clock lends an air of prestige to the already upmarket cabin.

It features an oversized touchscreen display of up to 31.2 cm (12.3 inches), high-end 17-speaker Mark Levinson audio and climate control system. The latter uses a new, energy saving technology dubbed S-Flow, with an occupant detection system to direct airflow only to the front area where passengers are actually seated.
Lexus’ Remote Touch multimedia control system also makes its debut in the GS for the first time. It is similar to those employed in the CT and RX models, albeit with improvement. It operates like a computer mouse and provides ‘intuitive operation’ of climate, audio, phone as well as the satellite navigation system.

As expected these days, the GS is equipped with an array of passive and active safety features, including 10 airbags (comprising front, side – front and rear, knee and curtain) and pre-collision system. The latter uses the radar cruise control system to detect a probable accident and an infrared camera that monitors the driver’s eyes. If the system detects that the driver is not looking forward when road circumstances suggest that an accident is likely, it activates an alarm. If the driver doesn’t respond, the system will automatically activate the brakes to reduce the severity of the impact.

Lexus is also making the F-Sport Package available across its line up. It offers styling and chassis upgrade to the standard car.

The new Lexus GS will start hitting showrooms across the world starting from February 2012.