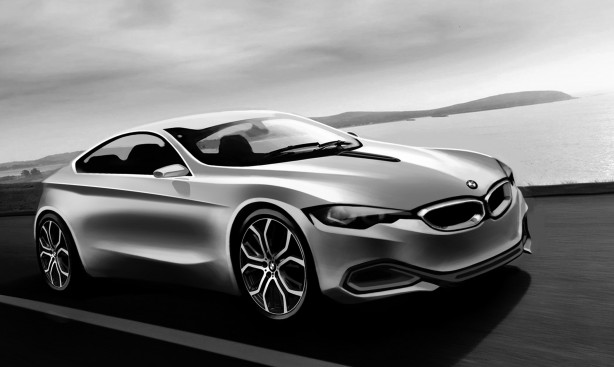 As the last BMW E92 M3 rolled off the production line last week, a new rendering of its replacement has surfaced on the web. The BMW M4 will replace the M3 in 2014 as the flagship 2-door M coupe for the 3-Series and 4-Series line up.

Looking more like a concept than a solid prediction, the new rendering deviates dramatically from what we have previously seen. Nevertheless, it is still one of the best sketches to date with large air intakes at the front, deep wheel arches and striking lines.

The new BMW M4 will make extensive use of carbon fibre components to try and tip the scale at below 1,500kg. Like the BMW 4-Series coupe, the new M4 will be both lower and wider than the outgoing M3 coupe, with the lowest centre of gravity in the whole BMW range.

Previous reports have speculated that the M4 will be powered by a 3.0-litre turbocharged straight-six engine rated at 310kW (416hp). This is only slightly higher than the output of the current M3, which produces 309kW (414hp). Although torque figure is still unknown, the new model is set to offer around 535Nm, an increase of 135Nm.

A concept version of the 2014 BMW M3/M4 is expected to be unveiled at the Frankfurt Motor Show in September.

Previous Is this the next-gen Bugatti Veyron?
Next Alfa Romeo 4C debuts at Goodwood Festival