Mercedes has unveiled the GLA 45 AMG concept at the Los Angeles Auto Show. Based on the upcoming GLA small cross over, the concept sports an AMG front bumper and prominent rear roof-mounted wing spoiler.

There are also canards in the front bumper, a rear diffuser flanked by a pair of twin tailpipes, high-performance brakes hiding behind 21-inch forged alloy wheels finished in matte black with a red rim flange and body graphics on the sides. The almost production ready GLA 45 AMG is equipped with the same mighty 2.0-litre turbocharged four-cylinder engine from the A 45 and CLA 45 AMG that delivers 265kW (360HP) of power and 450Nm of torque. It is married to a 7-speed AMG SPEEDSHIFT DCT transmission and an AMG 4MATIC all-wheel drive system.

According to Mercedes, the GLA 45 AMG will complete the 0-100km/h dash in less than 5 seconds, while returning around 7.0L/100km of average fuel consumption. The SUV will also comply with tough EU6 emissions standard. 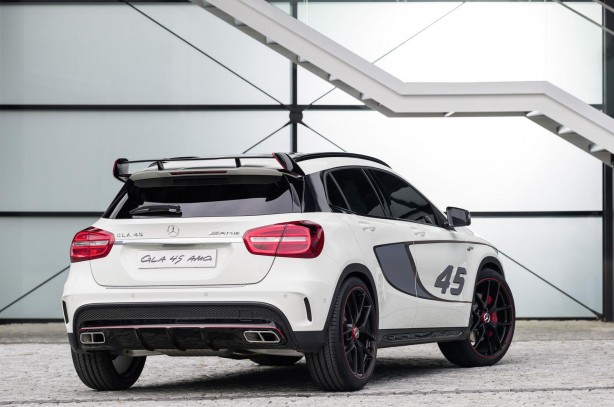 “With the Concept GLA 45 AMG, we are setting a stake firmly in the ground of the strongly growing market segment of compact SUVs. Our customers – a young target group who set great store by styling, dynamism and independence – can now start looking forward to a dynamic high-performance car. The most power four-cylinder engine in the world and the AMG Performance 4MATIC all-wheel-drive system add up to make the Concept GLA 45 AMG a unique proposition,” said Tobias Moers, Chairman of the Board of Management of Mercedes-AMG GmbH.