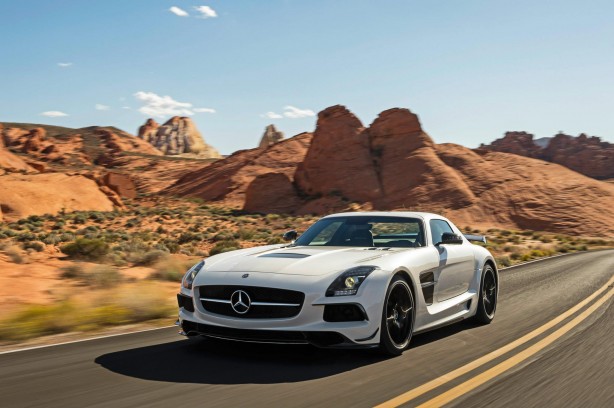 The latest Mercedes to get the Black Series treatment has been revealed – Mercedes SLS AMG Black Series. Due for release in mid 2013, the SLS AMG Black Series differs from the standard SLS with flared fenders, tinted headlights, new front and rear bumper, central air intake on the bonnet, side skirts, rear diffuser and the optional carbon-fibre rear spoiler.

Under the long bonnet house a slightly tweaked version of the 6.2-litre V8 engine found in the standard SLS. Redlining at an incredible 8,000 rpm, the retuned V8 now produces 631hp (470kW) and 635Nm of torque. Power is sent to the rear wheels via an improved seven-speed dual clutch transmission with quicker shift times.

The increase in revs comes from a modified valve train and camshafts as well as a new air intake system. The SLS Black Series also gets a new titanium exhaust system to harvest the striking sound of the high revving V8. 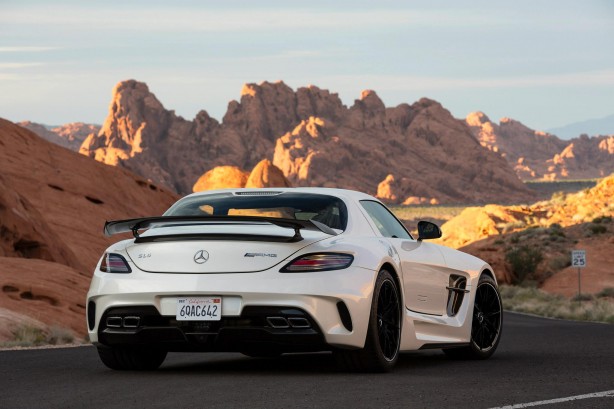 The SLS AMG Black Series accelerates from 0 to 100km/h in just 3.6 seconds and maxes out at 315km/h, compared to the standard SLS’s figures of 3.7 seconds and 317km/h respectively. The slightly lower top speed is the result of a new rear locking differential and aerodynamic body panels that are designed to provide more downforce for better cornering grip rather than top speed.

Weighing in at 1,550 kg, the SLS AMG Black Series is 70 kg lighter than the standard version, thanks to extensive use of carbon-fibre materials.

Tucked underneath those extended wheel arches are matte black 19-inch wheels for the front and 20-inch at the rear, respectively wrapped in 275mm and 325mm wide tyres.