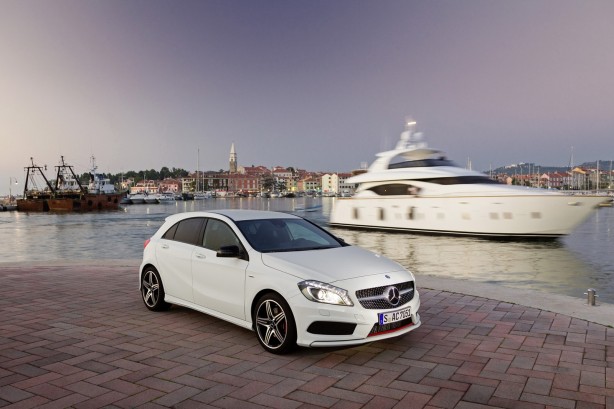 Mercedes has released more new photos of the all-new 2013 A-Class. Aimed to compete directly with the BMW 1 Series and Volkswagen Golf, the A-Class will be offered in three different variants – Urban, Style and the range topping AMG Sport.

The A-Class is already launched in the UK in June 2012 with price starting from £18,945. There are three petrol and two diesel engines on offer. The petrol range starts with the A180 BlueEfficient that comes with a 1.6-litre engine producing 121hp (122PS). The same engine produces 154hp (156PS) in the A200 BlueEfficient, while the range topping A250 BlueEfficient is equipped with a 2.0-litre turbo that generates 208hp (211PS).

Rastatt, Germany – In the light of the motto “the pulse of a new generation”, the first new Mercedes-Benz A-Class rolled off the production line today at the Mercedes-Benz Rastatt plant. The A-Class is the company’s second new compact model, following the start of production of the new B-Class at Rastatt in September 2011 and at the new Mercedes-Benz plant in Kecskemét, Hungary at the end of March 2012.

“This start of production marks a further milestone in our Mercedes-Benz 2020 growth strategy. The A-Class represents our offensive in the compact segment”, said Dr Dieter Zetsche, Chairman of the Board of Management of Daimler AG and Head of Mercedes-Benz Cars. “And there is more to come: The compact SUV will be the third model we will build here in Rastatt.”

Dr Wolfgang Bernhard, Member of the Board of Management of Daimler AG responsible for Manufacturing & Procurement Mercedes-Benz Cars & Mercedes-Benz Vans: “We are on a roll in manufacturing as well: Hard on the heels of the new B-Class, we are now producing the totally new A-Class for our customers. Thanks to the joint architecture, we can flexibly produce all models of our new compacts on the same production line at the respective site.”

Daimler is investing a total of around €1.2 billion in the Rastatt plant for the production of the new compact models. In a first wave of expansion, €600 million were used e.g. for the construction of a new bodyshell building and for tools, and a further €600 million will follow this and next year for a second wave of expansion. These new investments are slated for modifications of the assembly and corresponding equipment installations in the bodyshell production.

Another €400 million will be invested in the powertrain plants this and next year for production of components solely used in the new compact models. A total of 900 new permanent jobs have been created at Rastatt since 2010, 500 of them in 2012 alone. The plant is thus responding to the ongoing high demand, and continues to grow with the new generation of compact cars.

Since the start of sales in mid-June more than 40.000 customers have already ordered the new A-Class. More than 70.000 vehicles of the new B-Class were delivered to customers since its market launch in November 2011, “Demand for our premium compact cars is so strong that we are going to to introduce a third assembly shift in October 2012”, said Peter Wesp, Head of the Mercedes-Benz Rastatt plant. “Our team in Rastatt is doing a fantastic job, and we are very proud of their achievements.” The number of trainee positions has been increased to 70 per year.

About the new A-Class

The new Mercedes-Benz A-Class sets new standards in the compact segment: exceptionally emotive in its visual design, dynamic with engine power ratings ranging from 80 kW (109 hp) to 155 kW (211 hp), highly efficient with emissions from 98 g CO2/km and a best-in-class drag coefficient value of 0.27. The new A-Class underlines at the same time that safety is not a matter of price at Mercedes-Benz – among others, the radar-supported COLLISION PREVENTION ASSIST system comes as standard equipment. Prices in Germany start from €23,978.50 (incl. 19% VAT) for the A 180 BlueEFFICIENCY.
About the Mercedes-Benz plant in Rastatt

The Mercedes-Benz Rastatt plant was inaugurated in 1992. The first production model was the E-Class, made until 1996. Series production of the A-Class, which established the premium compact car segment, began in 1997. Unit sales of the A-Class reached 1.1 million until 2004, when the second generation was introduced.

The team at Rastatt has now made more than a million units of the successor generation. 2005 saw the arrival of another model, the B-Class, over 700,000 of which were supplied to customers all around the world over the following six years. The Rastatt plant is the company’s centre of competence for Mercedes-Benz compact cars.

In September 2011 the new B-Class went into production at Rastatt as the first of the new compact car models. The new generation of compact cars comprises the A-Class, the B-Class and a further three sporty and emotive vehicles, including a coupé and an SUV. These five new compact models are built in a production network of the Mercedes-Benz plants in Rastatt and Kecskemét, Hungary, which opened at the end of March 2012. The Rastatt plant will produce three of the five models: the new A-Class, the B-Class as well as the compact SUV.