As you can see from the video, the SUV has a coupé-like four door body, first introduced by the aforementioned BMW X6. It sits on a platform shared with the regular-bodied Mercedes ML-Class.

Its final design will likely draw inspiration from the Concept Coupé SUV introduced earlier this year by Stuttgart. Expect the MLC to share its drivetrain with the ML as well, including a range of turbo-diesel engines, turbocharged petrol units, as well as a high-performance 5.5-litre twin-turbo V8 set to appear under the bonnet of an AMG version.

Like the ML-Class, the MLC is set to be built at Mercedes-Benz’s Tuscaloosa plant in the US next year, with global deliveries starting late in 2015. 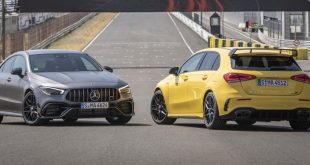