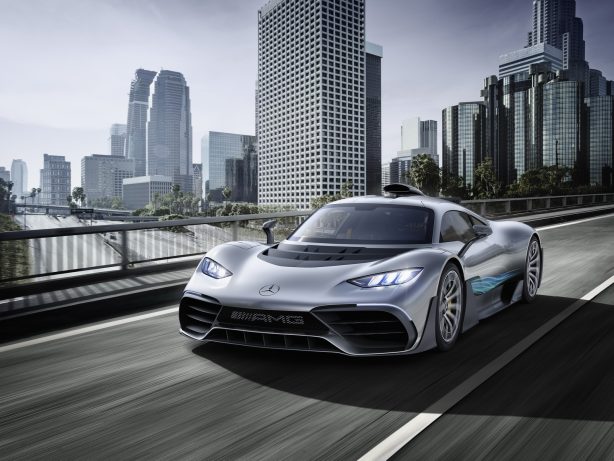 After a series of prolonged teasing, the new Mercedes-AMG Project One has finally made its official world debut as the only road legal car with a Formula 1 powertrain.

Power is derived from a tweaked version of the W08 F1 car’s hybrid system consisting of a 1.6-litre turbocharged V6 and four electric motors.

As expected from an F1 engine, the two front electric motors are capable of spinning up to 50,000rpm, more than twice the number of revs of the current best motors in the market. The third electric motor is integrated into the turbocharger while the fourth one is mounted directly on the combustion engine.

The pair of front motors along with the electric motor on the engine generates 120kW each, while the one mounted on the turbocharger churns out 90kW. Together, they put out “over 735kW (1000hp)”.

According to AMG, the set up not only eliminates turbo lag but response times are now even better than those of a naturally aspirated V8. This is thanks to the electric motors’ instant torque as well as the electrically-assisted turbocharger which in turn features exhaust gas and compressor turbines that are separate from each other and mounted at an optimum position to the exhaust side and the intake side of the V6 unit, and connected to one another by a shaft powered by the 90kW unit. 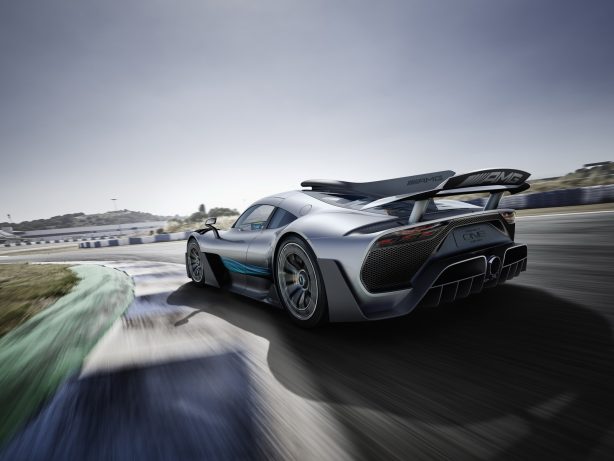 Power is channelled to the rear wheels via an all-new specially developed eight-speed automated manual transmission. The gearbox is activated hydraulically and offers both auto and manual modes via paddle shifters.

The Project One is built around a high-strength carbon-fibre monocoque body. The integrated engine and transmission also have load-bearing functions and completely support the rear suspension.

Mercedes-AMG says the Project One is capable of dashing from 0 to 200km/h (that’s right, two hundred!) in just 6.0 seconds before hitting a top speed in excess of 350km/h. 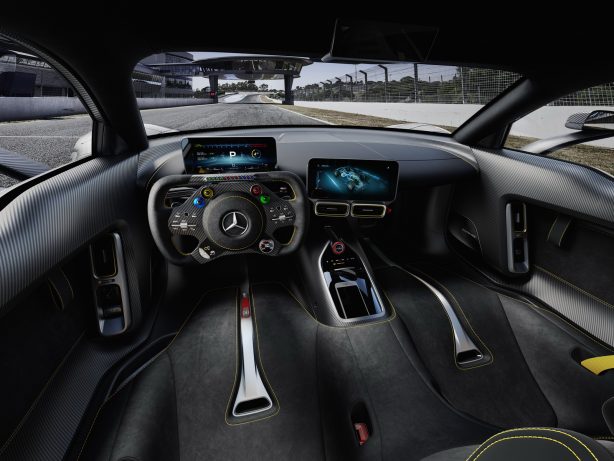 The car’s other technical highlights include a sizeable lithium-ion battery pack pinched directly from the F1 car for a 25km all-electric range, a drive system that operates with 800 volts instead of the usual 400 and a variable all-wheel drive system with torque vectoring. Under normal driving conditions, the drivetrain recuperates up to 80 percent of the energy needed that is then fed back to the battery.

Inside, the F1-inspired, squared off steering wheel features controls for driving modes, suspension setup and LED shift display. Mod cons include air-conditioning, power windows and a rear-view camera. There’s also a pair of 10-inch high-definition displays – one for the instruments and one for the infotainment system.