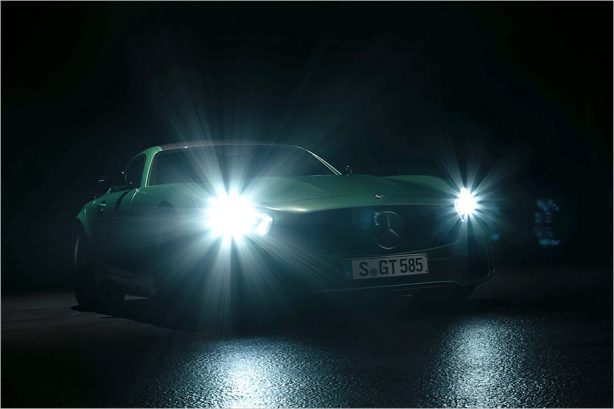 The most hardcover version of the Mercedes-AMG GT range has been under development for awhile and technical details are still being kept away. Until its debut, this short teaser video released today by Mercedes would have to be the only clue to what we can expect from the AMG GT R.

Following the principle of earlier “Black Series” AMGs, the AMG GT R can be seen in the shady video sporting carbon fibre roof, black wing mirror housing and a carbon fibre rear spoiler. It’s expected to be 100kg lighter than the regular AMG GT and feature some sort of active aerodynamic elements.

At the front, subtle differences are marked by a new grille and splitter under the front bumper. The rear is dominated by a deeper rear diffuser housing centrally mounted exhaust pipes.

Inside, the new flagship gets racing bucket seats with yellow seat belts and even more Alcantara.

The video makes no mention of power figures, but the number plates bearing “S-GT 585” could be a hint to the magic number. 585hp (430kW) is exactly the power output of the twin-turbo 5.5-litre V8 AMG S 63. Could the AMG GT R be getting the same engine as its bigger brother? All will be unveiled on June 24.