McLaren lifts the lid on 570S Spider in Australian debut 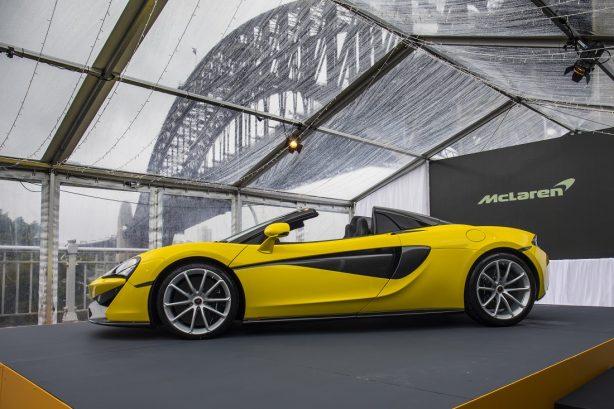 McLaren has unveiled its latest model in the Sports Series family – the McLaren 570S Spider. Revealed for the first time in Australia at a luxury waterfront venue in Sydney, the new 570S Spider combines the dynamism and refinement of the 570S Coupé with the extra exhilaration of open-air motoring.

Hand-assembled in Woking, England, the 570S Spider is the most attainable McLaren Spider ever and brings supercar attributes such as carbon-fibre construction, a mid-engined layout and supercar performance for the first time to the luxury sports convertible segment.

George Biggs, Managing Director of McLaren Automotive Asia said: “The McLaren 570S Spider is a truly exceptional car and I am pleased to reveal it here in Sydney for the Australian debut. It has been an outstanding year for McLaren. We’ve received a phenomenal response since the release of the 720S, followed by the announcement of our fourth consecutive year of profitability and today we celebrate the launch of the latest addition to the McLaren Sports Series family. The McLaren 570S Spider is a convertible without compromise, with an attractive retractable hardtop that delivers the exhilaration of roof-down motoring. It is an extremely thrilling car to drive. I cannot wait to see it being driven on Australian roads.” 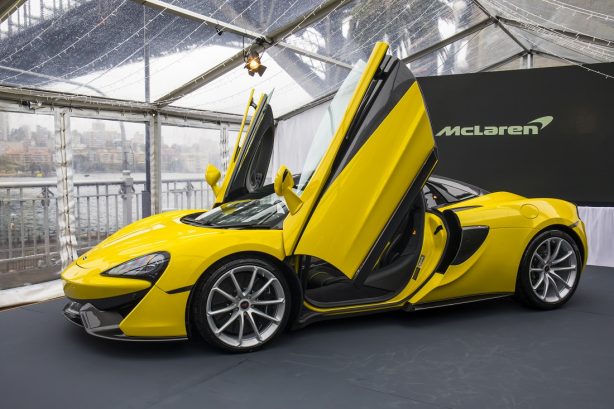 The two-seat, rear-wheel drive 570S Spider is the third bodystyle in McLaren’s Sports Series portfolio, lining up alongside the Coupé and the GT. Compared to the Coupé, the 570S Spider adds a neatly integrated, retractable hardtop. The two-piece roof – which is engineered using technology proven in the McLaren 650S and 675LT Spider models – is constructed of lightweight composite panels and creates a purposeful, sleek appearance whether raised or lowered. The roof takes just 15 seconds to open or close, at vehicle speeds of up to 40km/h (25mph). 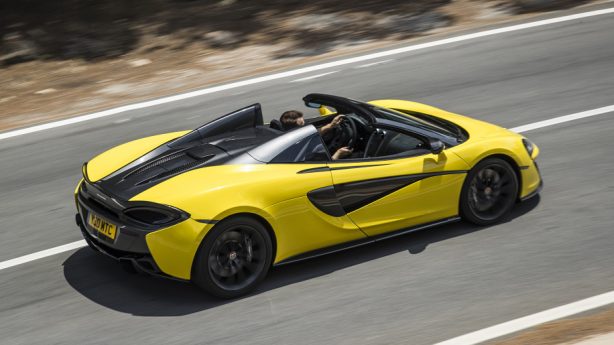 According to McLaren, there are no performance compromises versus the 570S Coupé, with the Spider maintaining the same electrifying pace, dynamic excellence and impressive refinement thanks to its 3.8-litre twin-turbocharged McLaren V8 engine with seven-speed dual clutch gearbox producing a potent 570PS (419kW) and 600Nm.

It’s claimed that the carbon fibre MonoCell II chassis at the heart of all Sports Series cars does not suffer any reduction in strength or stiffness in convertible guise, or require any additional structural actions. This has allowed McLaren engineers to design and develop the 570S Spider without concerns that are potentially a significant issue with steel or aluminium structures. 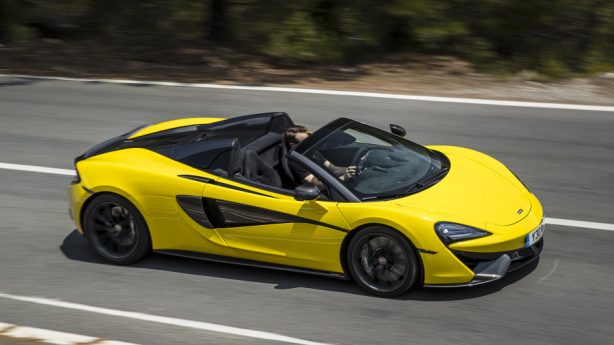 Speaking at the McLaren 570S Spider launch event in Sydney, Alex Long, Global Head of Product commented: “The new Spider is about pure exhilaration. It’s built on the incredible Monocell II carbon fibre chassis, so we have been able to create a convertible which has the same ride and handling magic as the 570S coupe and with hardly any weight penalty. We also have the Active Dynamics Panel which allows the driver to choose from Normal, Sport or Track to adjust the handling and powertrain to suit the conditions. These features are unique to McLaren and make the 570S the finest handling convertible in the world.”

Deliveries of the McLaren 570S Spider will commence in Australia in late 2017, priced from AUD$435,750 plus on-roads.