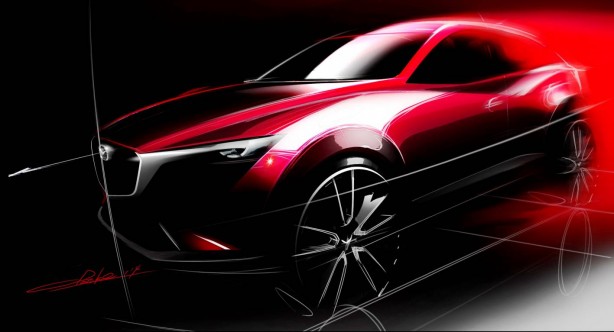 Mazda has today announced that its upcoming compact crossover SUV, the Mazda CX-3, will make its world premiere at the Los Angeles Auto Show, running from November 21 through November 30, 2014. Along with the announcement, Mazda has also released a first teaser image of the new SUV.

The all-new CX-3 crossover will sit below the larger CX-5 and even larger CX-9, rivalling the likes of Ford Kuga, Mitsubishi ASX and Nissan Qashqai in one of the fastest growing segments.

The Mazda CX-3 is the fifth vehicle in the brand’s line-up of new-generation products that feature the full range of SKYACTIV Technology. The company has remained tight lipped on technical details but expect the CX-3 to adopt the Mazda2’s range of four-cylinder 1.5-litre petrol and diesel drivetrains.

Mazda’s ‘KODO—Soul of Motion’ design language will be evolved even further in the CX-3, with the company claiming that the entry-level crossover’s design will exhibit “sharper form with an enhanced sense of speed.”

Along side the new CX-3, the all-new Mazda MX-5 two-seater open-top sports car will also make its North American auto show debut at the Los Angeles Auto Show. The two new models will be accompanied by the facelifted CX-5 and Mazda6.