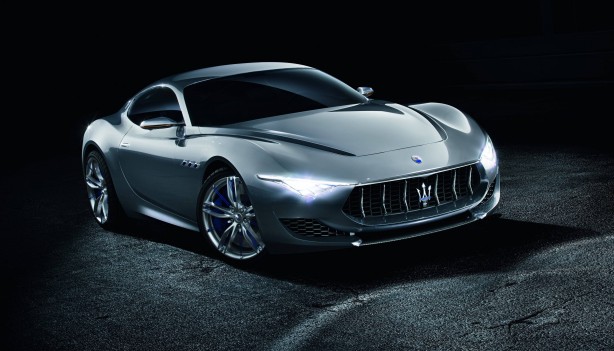 Maserati is celebrating its centenary in 2014. One hundred years have passed since Alfieri, Ettore and Ernesto Maserati opened their first workshop in Bologna on December 1, 1914.

To commemorate the occasion, Maserati has unveiled the Maserati Alfieri, a 2+2 concept coupe, at the 2014 Geneva International Motor Show.

The Alfieri is a realistic and 100 per cent functional prototype that say much about the design DNA of future Maseratis.

The striking new concept bears the name of Alfieri, the most prominent of the Maserati brothers and the engineering genius who founded “Officine Alfieri Maserati” in Bologna a century ago. The Alfieri was created at the Maserati Centro Stile in Turin by a small group of talented young designers led by Marco Tencone. The project was masterminded by Lorenzo Ramaciotti. 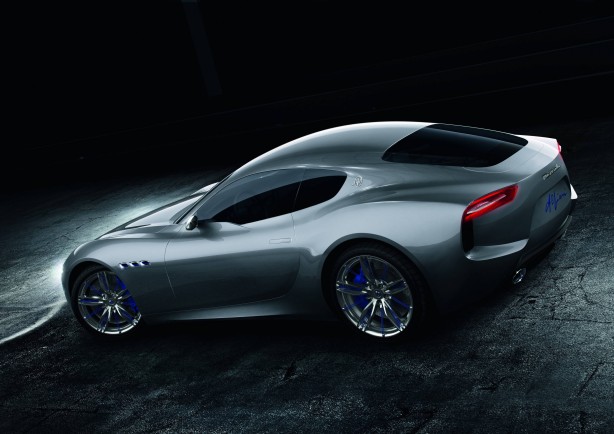 In this, its 100th year, the Maserati company is in fine health. An ambitious plan that took off in 2013 with the presentation of the Quattroporte and Ghibli models is transforming the Italian manufacturer into a serious player in the premium sports car segment. In just one year, from 2012 to 2013, sales increased by 150 per cent, from 6,200 to 15,400 cars. With the new Quattroporte already on sale in Australia and New Zealand and to be followed by the Ghibli in the middle of the year, Maserati is on target to set new sales records in Australian and New Zealand in 2014.

The Alfieri is being unveiled at just the right time to re-establish Maserati’s true orientation in terms of design and production. If the new Quattroporte and Ghibli gave the impression that Maserati was becoming oriented towards sporty, upper class four door saloons, this new concept is striking back and reminding everybody that the brand has a remarkable racing heritage and a unique tradition in exotic GT cars.

There is no doubt that the Alfieri concept represents the true essence of the Maserati brand. It is a sleek, Italian style 2+2 like the 1957 3500 GT, the 1959 5000 GT and the 1969 Indy before it, and clearly affirms Maserati’s racing DNA. Sportier in character than the GranTurismo, the Alfieri boasts proportions that might well be archetypal for a future true sport car and certainly hint at the brand’s stylistic intentions for the near future. “Maserati doesn’t change. Maserati is always Maserati”, as Ramaciotti puts it. 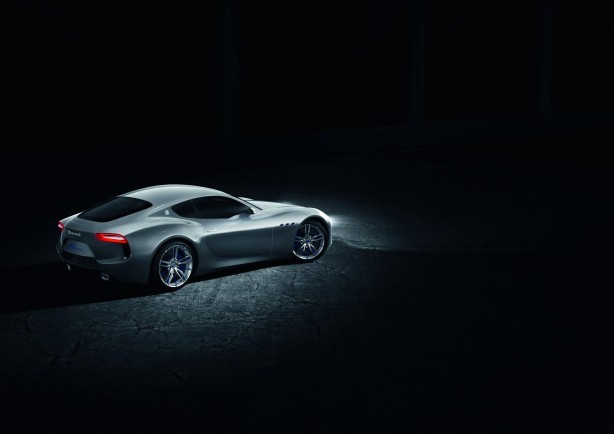 As with all concept cars, there is a strong desire to turn the Alfieri into reality. Though not yet at the final prototype stage like tomorrow’s grand touring, it has nevertheless been conceived, designed and created in an approach aimed at 100% realism.

According to Lorenzo Ramaciotti, “The Alfieri is a transition point between 100 glorious years of history and the future that is opening up before us. I sincerely can’t say that we’ll see this car in production in two years-time, but I’m certain we’ll see something very similar.”

The development process kicked off last summer. Designers were asked to start from a blank sheet to create a concept for Maserati’s centenary. The sketches that would lead to what is now the Alfieri emerged among various other proposals.

One of the most fascinating cars of all times, the Maserati A6 GCS-53 designed by Pininfarina in 1954, proved a valuable source of inspiration for the designers. Far more than a rare racing machine for gentlemen drivers, the A6 GCS-53 was a masterpiece of design. It was also the last car that Pininfarina designed on a Maserati model before making a comeback in the first decade of the 21st century with the Quattroporte and the GranTurismo. The A6 GCS-53 was an iconic piece of automotive technology and simply breathtaking for its proportions and design features: a diminutive cabin positioned almost over the rear wheels, a seemingly endless bonnet and long, sinuous wings stretching nearly to the rear wheels. 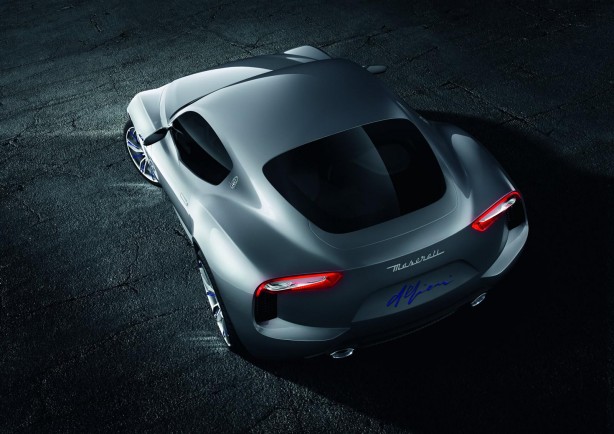 The Alfieri is obviously much more than a futuristic interpretation of the A6 GCS-53. Maserati has a diversified design history that encourages designers to look forward rather than back: “We wanted the Alfieri to test future design paths”, Ramaciotti explains. “The car is very aggressive but still sober in style, forceful but understated.”

While the inverted A pillars of the A6 GCS-53 were not an option in the new Alfieri, their optical effect has been recreated by a sculptured line that starts from the bonnet and fades to the door high line, making the windscreen look larger.

The long, low nose is a stylistic evolution from contemporary Maserati models. The grille is divided vertically into two concave sections that seem to hang in the air. The sleek DRLs are connected by a clear accent line with the iconic “V” motif in the centre. The aggressive headlights incorporate bi-xenon-LED bulbs and are rendered distinctive by a characteristic eyebrow, repeated on the twin exhaust tail pipes. 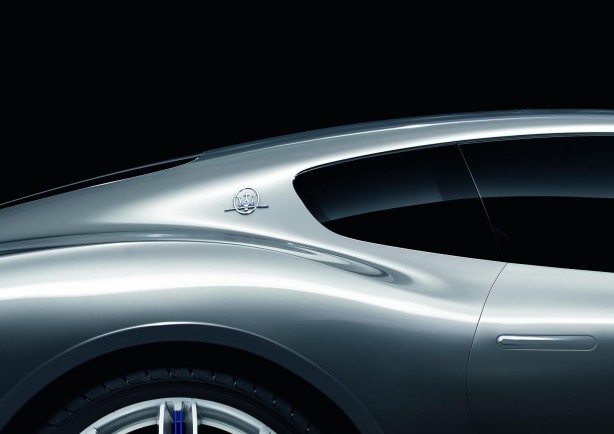 The three dimensional candy-cane tail lights are made up of two red external elements with a white element inside. Their shape harmoniously follows the rear shoulder of the car and complements the air ducts underneath to create an impressive, racing style rear view.

The Alfieri’s designers have developed a streamlined, uncluttered form where the only decorative elements – the restyled triple air ducts on the wheel arches – are finely integrated. This eye-catching silhouette almost entices you to caress it.

The wheels have been specially designed for the Alfieri concept. Forged from single aluminium elements, the 21” diameter rear and 20” front wheels feature integrated decorative spokes that wink at the classic spoke wheels of the 1950s.

Though form is the dominant element, colour and detail play a key supporting role. A liquid metal colour called “Steel Flair” has been chosen for this Maserati 100th anniversary concept. This choice of finish gives the Alfieri’s elegant shape a refined, technical and contemporary look, as if a metallic veil has been draped over a naked body.

The decorative spokes of the forged wheels, the brake calipers, the grille, the iconic triple air ducts, the rear diffuser, the provocative eyebrow of the exhaust tail pipes are all finished in Maserati Blue. The Alfieri signature, retrieved from an old Maserati document and sculpted in the number plate recess on the rear of the car is also in blue. The front bumper spoiler and rear diffuser are in carbon fibre with aluminium inserts. 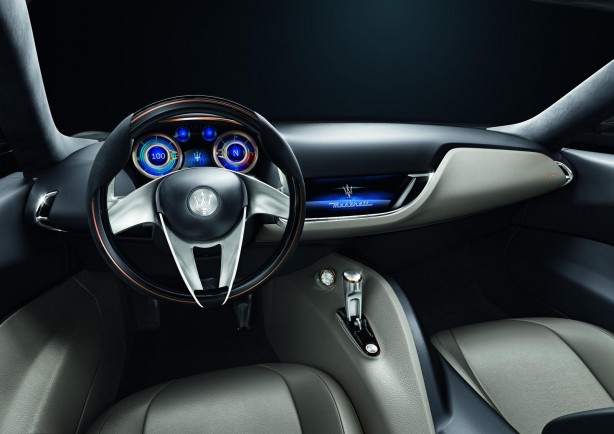 In the 2+2 seat cabin, the design team have created a study in simplicity and minimalism. The suspended dashboard is conceptually inspired by that of the Maserati 5000 GT. The dashboard boasts a clean, organic, two-tone design built around a central TUFT screen.

The instrument panel has a classic layout with two main clocks with two smaller ones in between. The edge of each is embellished with a small “Officine Maserati” label.

Rather than analogue clocks, the instrument panel features TFT displays inspired by modern photographic camera menus in the way they indicate km/h and engine rpm. Instead of a rotating indicator, the numbers themselves rotate around the clocks. Current speed and RPM are highlighted by a magnifying glass effect.

There is even a touch of racing brutality inside the Alfieri. The floor is finished in a material that imitates oxidised steel, a material commonly found on racing cars of the 1950s.

Luna white and dark Basalt blue are the dominant colours inside the airy Alfieri cockpit. Poltrona Frau aniline leather with a natural look and feel covers the seats, dashboard and central console. Copper subtly highlights the most character lines and brings a retro feeling to an otherwise futuristic environment. 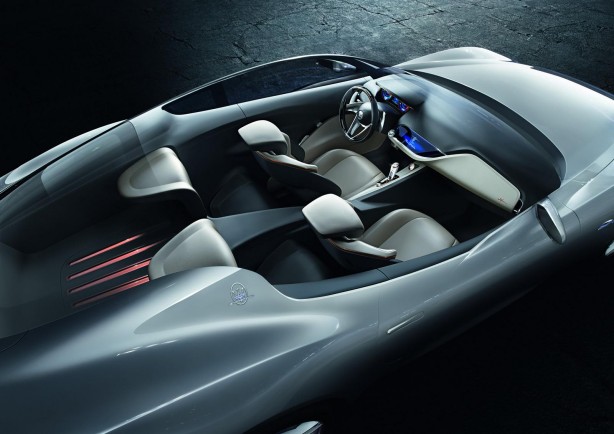 The interior has a classic 2+2 layout with an open space luggage compartment. The rear seat backrests have a unique, elongated design. Well visible from the outside, they add a sense of speed to the interior. The rear seats tilt forwards through 90 degrees and also serve as luggage bulkheads.

The passenger seats, though inspired by the racing bucket seats of the ’50s, look futuristic and have a modern structure with half-integrated headrests and a bridge-like profile that serves as main structural element.

The three-spoke steering wheel and the crown deep in its centre form a three dimensional sculpture that seems to have been crafted in the workshop of an Italian artisan. Like the remainder of the Alfieri’s interior, it too is 100% handmade .

The oval clock with red-blue back plate incorporates two sub-dials and is obviously inspired by a classic chronograph.

The Alfieri is based on the GranTurismo MC Stradale chassis with a 24 centimetre shorter wheelbase, giving it the proportions of a genuine supercar. Alfieri is 4,590 mm long with a 2,700 mm wheelbase, 1,930 mm wide and 1,280 mm high. 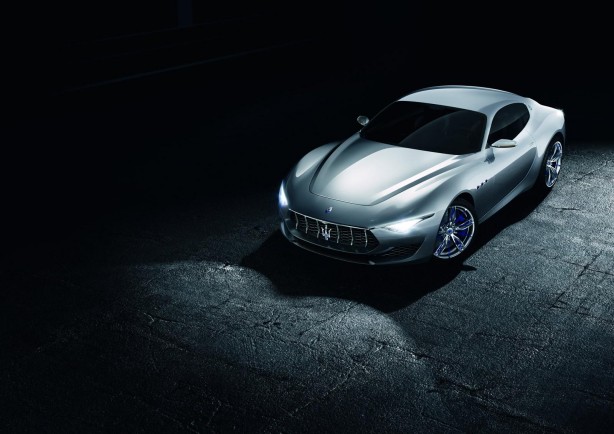 Under the sleek body lies the transaxle platform of the Maserati GranTurismo. This 4.7 litre, naturally aspirated, V8 engine from Maranello develops 460 bhp @ 7,000 rpm and 520 Nm @ 4,750 rpm and gives the Alfieri a real driving force. Thanks to a special exhaust layout, this thoroughbred V8 also produces a breathtaking sound that made a real impression in Geneva when the concept was unveiled.

A six-speed, electro-actuated gearbox (MC Shift) is mounted in a single unit with the limited slip rear differential and connected to the engine via a rigid torque tube. The transaxle layout gives the Alfieri an optimized front-rear weight distribution with a slight predominance to the rear axle.