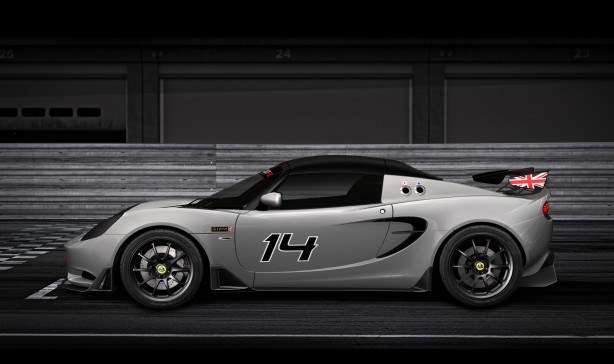 Lotus has released another photo of the brand’s Elise S Cup R track weapon which will make its public debut at the 2014 Autosport in Birmingham, UK from 9-12 January.

The latest product from the Lotus Motorsport collection is based on the road-going Elise S and features a mid-mounted, 1.8-litre four-cylinder supercharged engine mated to a six-speed manual gearbox that transfers drive to the road via the 16-/ 17-inch wheels shod in Yokohama Advan Neova AD07 LTS tyres.

The car’s cabin is equipped with a FIA-compliant roll cage, a HANS-compatible racing seat and a quick-release steering wheel. Options available for the car include ultra-lightweight motorsport wheels, FIA-compliant fuel cell, air conditioning system and a race-spec passenger seat with four-point harness.

The Lotus Elise S Cup R is priced from £39,125 and will be eligible to compete in the 2014 Lotus Cup racing series.