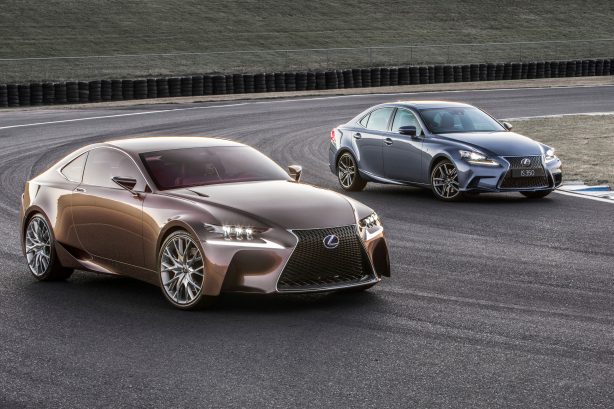 So just how much of the Lexus LF-CC concept design has dribbled down to the new 2013 Lexus IS? Well, at the recent Australian International Design Awards, Lexus has brought the two cars together to showcase the company’s evolving L-Finesse design language.

Parked side by side, the similarities between the LF-CC concept and the new IS are profound, with the IS adopting most noticeably, the concept’s spindle grille and headlight design. To the side, both cars share the sharply sculpted form of an airflow-regulating fin that flows from underneath the side of the car and upwards through the rear wheel-arch.

“We went back to basics to restudy and develop our visual language, thereby setting this vehicle far away from its rivals in terms of exterior styling,” said Lexus Design Division project manager Takeshi Tanabe said. 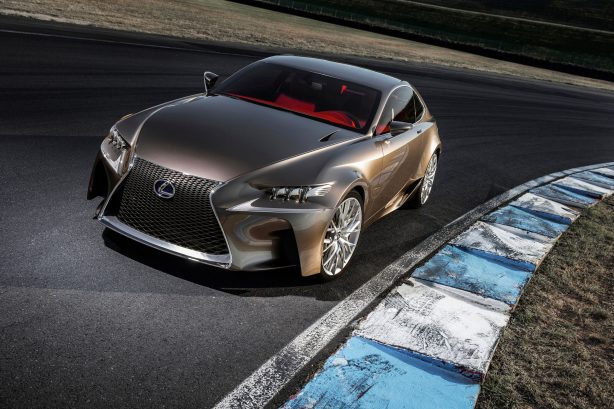 Although concept in design, the LF-CC provides much of the inspiration for the forthcoming, all-new IS Line and provides a hint of a future two-door mid-size coupe which Lexus has scheduled for production in 2015.

Lexus Australia chief executive Sean Hanley said that the LF-CC brings with it renewed focus on design and driving dynamics.

“The LF-CC signals a new Lexus, one buoyed by confidence and a desire to deliver vehicles that are visually and dynamically appealing,” Mr Hanley said.

“LF-CC is more than a concept, it is a promise from Lexus to deliver an engaging and exciting two-door coupe – in fact, its impact is already evident in the forthcoming IS Line.

“The beauty of LF-CC is more than skin deep, with its innovative petrol-electric drivetrain and on-board features, the LF-CC and in fact the LF-LC coupe concept are graphic demonstrations of what’s to come from Lexus,” Mr Hanley said. 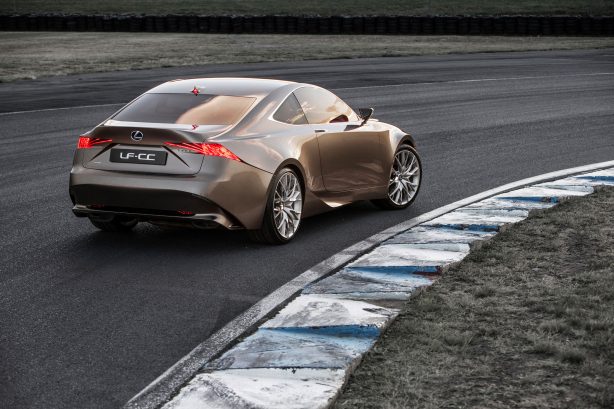 Under the skin, the new LF-CC based coupe is expected to be powered by a 2.5-litre hybrid drivetrain. The 2.5-litre four cylinder Atkinson cycle hybrid powerplant will feature D4-S (direct and port) injection, which boosts power delivery and efficiency.

Combined, the petrol-electric hybrid drivetrain will produce just 113 grams of CO2 per kilometre* while consuming just 4.9 litres of fuel per 100km* (combined cycle) with a combined power output of 164kW from its petrol electric drivetrain.

In addition to the high-res photos, Lexus has also released a video from the photoshoot.