The facelifted Lexus ES and all-new fourth-generation Lexus RX have been unveiled at the 2015 Shanghai Motor Show today.

Teased earlier this month, the new Lexus ES receives a mild exterior makeover with a commanding front fascia featuring Lexus’ trademark spindle grille, which is framed in satin chrome to provide a sense of “luxury and differentiation”.

The ES’ redesigned headlights are equipped with LED projector technology, while the brand’s signature L-shaped arrowhead Daytime Running Lights extend outside the headlight element to provide a distinctive appearance.

The fog lamps have been redesigned and relocated to the outer lower corners of the front fascia to amplify the vehicle’s wide stance. It also has a new taillight design, which features the L-shaped theme to provide an instantly recognisable glow at night.

New exterior colours, details of which will be announced closer to the time of local launch, will also join the ES paint palette.

All colours feature Lexus’ innovative self-restoring coat which allows the paint’s clear coat to heal itself, even from minor damage. This is brought to life by a multi-stage paint process that gives Lexus models a deep, jewel-like lustre. 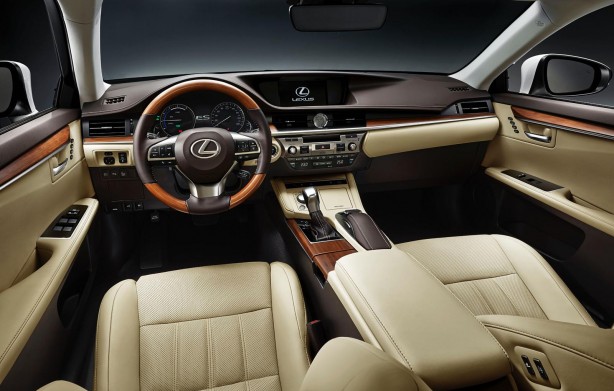 Inside, ES’ refreshed cabin includes a new steering wheel, a larger 4.2-inch TFT colour multi-information display in the instrumentation panel and new “Enter” buttons on either side of the Remote Touch Interface.

The interior also features new colour combinations, including colour-matched upholstery along the centre console and new gear selector trim. A panoramic glass roof, which is a Lexus Australia first, will be available on ES 350 Sports Luxury as an option.

Lexus engineers applied structural reinforcements to increase stiffness in the ES’ unibody construction. Adapted from the IS sports sedan, the new chassis tuning provides the ES with enhanced ride quality and improved handling.

Unchanged for 2015, the ES’ engine line-up comprises of a 3.5-litre V6 petrol unit or a 2.5-litre petrol-electric hybrid powertrain.

Unveiled last week, the all-new Lexus RX makes its official debut at the Shanghai Motor Show in the form of a RX 200t. Replacing the RX 270, the RX 200t features a 2.0-litre turbo four-cylinder engine, which was first introduced in the smaller Lexus NX earlier this year.

The 8AR-FTS powerplant features VVT-iW (Variable Valve Timing-intelligent Wide) and a low-inertia, twin-scroll turbocharger with air-to-liquid intercooler. It can operate on both the fuel-saving Atkinson cycle and the conventional Otto cycle.

The engine develops 175kW and 340Nm. It will be mated to a six-speed automatic transmission.

The new ES will arrive in Australia in the second half of 2015, while all-new RX, including RX 200t, will launch in Australia in 2016. Further details on local specification and pricing will be announced closer to launch.