Japanese car magazine BEST CAR has published a rendering of the the Lexus RC F coupe. Having recently filed for trademark, the new “RC” nameplate is expected to be the next member to join the Lexus family, alongside the new “NS” line of sporty crossover. 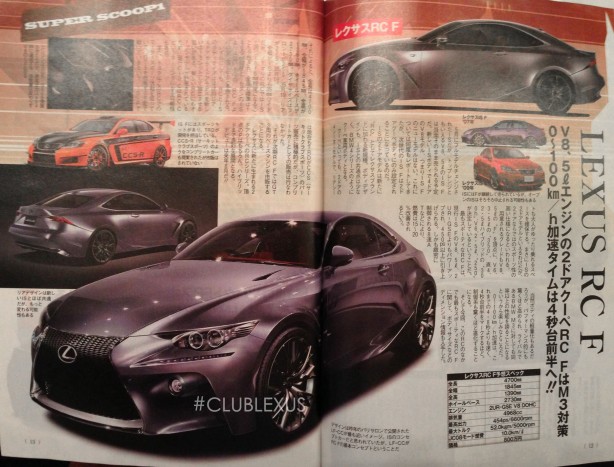 The Lexus RC range will be coupe models based on the new 2014 Lexus IS platform with styling closely related to the LF-CC concept. Three models are expected to be offered – the RC200t equipped with a new turbocharged 2.0-litre four-cylinder engine, which will soon be available in the new IS sedan and the upcoming NS200t, the RC300h using the same hybrid powertrain as the IS300h and the RC350 sharing the same 3.5-litre V6 as the IS350.

But what car enthusiasts have been eagerly waiting for is the rumoured flagship RC F coupe – a new high performance coupe that could rival the likes BMW M4 and Mercedes C63 AMG coupe. Lexus has remained tight lipped about specification but we can expect an updated version of the 5.0-litre V8 found in the IS F.