Lexus LF-NX concept takes to the stage at Frankfurt 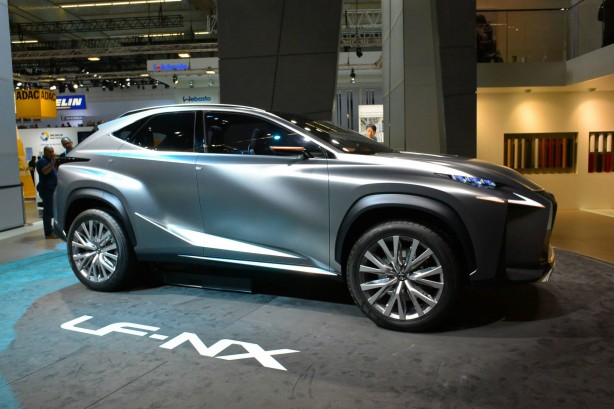 Lexus has taken the wraps off its LF-NX compact SUV concept at the 2013 Frankfurt Motor Show.

The LF-NX is powered by a new variation of the Lexus Hybrid Drive full hybrid system, tuned for SUV performance. It combines a 2.5-litre, four-cylinder Atkinson cycle petrol engine with a power electric motor. At lower speeds, LF-NX can be driven under electric motor power alone.

The powerfully sculpted styling reflects a further evolution of the L-finesse design language that influences the look of all today’s Lexus models.

The car’s frontal appearance is dominated by the most aggressive interpretation of Lexus’s spindle grille we have seen to date. Just like the new Lexus IS, the LF-NX features Lexus’ signature arrangement of the front lights. The daytime running lights are given visual emphasis by being positioned independently from the headlamps, and underscored by full length LED turn signal lamps. The headlamps comprise three diamond-shaped LED units. 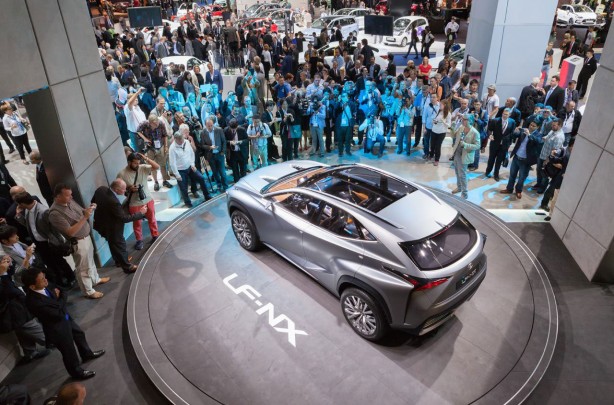 The LF-NX also displays a distinctive treatment of the front corners, which separate the bumper from the front wings with a sharp vertical cut line that narrows to a point beneath the headlamp units.

The classic Lexus L-shape of the lamps is scored strongly into the rear bodywork, echoing the spindle form of the front grille. The wide lower bumper has no visible exhaust outlet, in recognition of the full hybrid powertrain’s low emissions performance.

The concept is being presented in a new Brushed Metal Silver exterior finish that creates a striking impression of the car having been carved from a single piece of solid metal.

In a continuation of the ‘Human Oriented’ L-finesse design concept, the cabin dash is divided into an upper display zone and lower operation zone – a design honed over successive Lexus generations.

The design allows for intuitive interaction with the vehicle’s next generation technology, which includes a touch-sensitive electrostatic switch, and a new touch pad Remote Touch Interface (RTI) design.

Reinforcing the LF-NX crossover credentials, the strength and refinement of the interior’s carved metal surfacing is complemented throughout by Sunrise Yellow / Black leather accented upholstery with contrast stitching, and sophisticated blue instrument lighting.

Along with the Frankfurt debut, Lexus International has also released a video of detailing the design of the LF-NX concept.