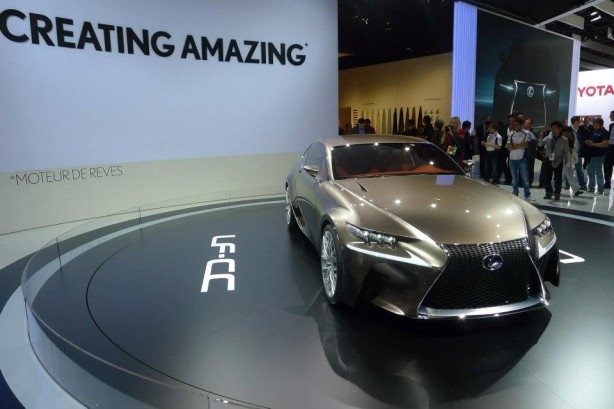 The much anticipated Lexus LF-CC Concept has been finally revealed at the 2012 Paris Motor Show. The new concept from Lexus showcases the company’s future design language and latest interpretation of the signature ‘spindle grille. There is no question that the LF-CC Concept will be one of the major highlights of the show. 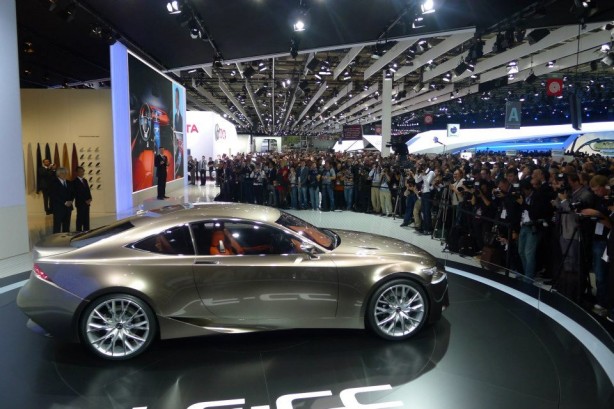 Photos of the LF-CC Concept have been circulating around the internet for weeks prior to today’s unveiling, gathering huge interest around the motoring world.

The LF-CC Concept’s power comes from a highly efficient 2.5 litre engine paired with a hybrid system to achieve class-leading efficiency.

Announcing the launch of a premium mid-sized coupe in the more accessible D-segment in the near future, the LF-CC reinforces Lexus’ commitment to create more engaging, inspirational vehicles through attractive design, a superior driving experience and advanced technologies.

The LF-CC showcases the latest evolution of the company’s unique L-finesse design language, with the boldest yet interpretation of the signature Lexus ‘spindle’ grille. Framed by the bonnet lip, deep lower spoiler and powerfully projecting front fender tips, the grille mesh is encased in a deep, metal- finish surround and takes on a pronounced, 3D form.

A unique, 3 LED-projector headlamp design is housed in the narrow gap between the lower and upper fender surfaces, without a conventional, one-piece cover. Independent Daytime Running Lights (DRLs) are fully integrated into the upper bumper surface to complete this unique new design.

The broad lower fenders are aerodynamically sculpted to manage the flow of air to the engine bay and front brakes, whilst reinforcing the powerful, dynamic road presence of the new Lexus signature frontal design.

In profile, the powerful convex curve of the bonnet flows seamlessly through a steeply raked windscreen into a roofline which deliberately peaks towards the rear of the cabin to emphasise the traction available from the vehicle’s rear-wheel drive powertrain.

The bodywork is stretched tight between the front and rear fenders, and the rear fender is less pronounced than that of the front, reinforcing the concentration of vehicle weight over the driven wheels for maximum traction.

Further developing a design form initiated on the LF-LC concept and the high-performance LFA, the sharply sculpted form of an airflow regulating fin flows from underneath the side of the car and upwards through the rear wheel arch. This aerodynamic detail is designed to increase downforce over the driven wheels, further improving traction.

The airflow regulating fin merges with the falling roofline in a pronounced rear spoiler integrated within the boot lid, seamlessly fusing design and aerodynamic elements to give the vehicle its distinctive, coupe proportions.

The LF-CC is finished in a new, ‘Fluid Titanium’ exterior colour, a metallic finish with exceptionally high brilliance which combines sharp, bright highlighting with dark shaded surfaces to reinforce the powerful forms of the bodywork’s sculpted surfaces.

The LF-CC’s interior hints at the progressive luxury of a future Lexus model cabin layout, and represents a further development of the company’s HMI (Human Machine Interface) design philosophy.

The dashboard is divided into two distinct zones: an upper, Display Zone, with a multi-display screen located at an ideal distance for at-a-glance viewing, and a lower, Operation Zone, which allows access to the uniquely designed shift lever and an innovative touch tracer display for remote system control.

This clear division of zones creates a unique fusion of an airy, spacious cabin and a sporting cockpit which places the emphasis on a snug, highly focused driving environment. All functional driving components are consolidated in the driver’s seat surroundings, combining outstanding ergonomics with advanced HMI technologies.
The driver benefits from a low, highly focused driving position with a sporting, wide grip steering wheel, optimum pedal placement and high-visibility instrument dials. The touch tracer display for remote system control is located directly behind the shift lever for maximum comfort and ease of operation.

Coordinating with the ‘Fluid Titanium’ exterior colour, the seats, door panels and instrument binnacle hood are trimmed in a warm, elegant amber leather finish. The extensive use of metallic finishes and soft touch materials throughout reinforces the premium quality of the environment. The contrast between the exterior and interior colour schemes gives the car an elegant yet simultaneously sporting image.

Representing a new Lexus powertrain for future production, the LF-CC is equipped with an all-new, highly efficient, 2.5 litre full hybrid powertrain delivering a combination of the engaging performance appropriate to a sporting, D-segment coupe and low CO2 emissions, targeted below 100 g/km. This powertrain will achieve class-leading energy efficiency, with more than 2 hp produced per gram of CO2.

In addition to the petrol engine and electric motor, the LF-CC hybrid drive system further comprises a generator, a high-performance battery, a power split device which, via planetary reduction gears, combines and re-allocates power from the engine, electric motor and generator according to operational requirements, and a compact power control unit to govern the high speed interaction of the system components.

Adapted specifically for the hybrid powertrain, the all-new 2.5 litre, DOHC, 4-cylinder petrol engine benefits from several technical improvements. It adopts the Atkinson cycle and D-4S direct injection technology to optimise both the power and fuel-efficiency benefits of Lexus Hybrid Drive.

Lexus will introduce this new hybrid powertrain into its model range in the near future.