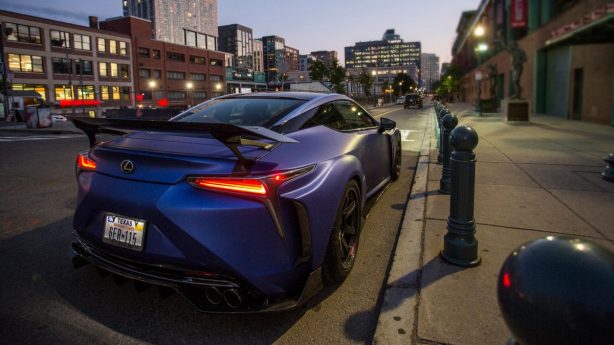 Lexus is participating in the 2018 Gold Rush Rally with a bespoke LC coupe, as revealed by a photo released by the luxury car maker in a tweet today.

Accompanying the single rear quarter night shot of the hotted up Lexus LC are the words: “The Lexus tuned Lexus LC relaxing before the rush. Stay tuned for more images as the Gold Rush Rally kicks off in Boston.“

It appears that the striking matte blue LC participating in the rally is adorned with the Artisan Spirit wide body kit released exclusively for the sports coupe last year. However, as Lexus’ own entrant into the event, it begs one question: Is this hiding some sort of Lexus LC F underneath?

At the global launch of the Lexus LC 500, the big boss of Toyota Motor Corporation, Akio Toyoda declared that it was just the beginning of a new era for the luxury brand. We interpreted that as: hold your breath a higher performance, F version of the LC is coming.

And this speculation was confirmed later with Toyota, the parent company of Lexus, filing a trademark application for the name “Lexus LC F” in Europe.

The LC F trademark didn’t come as a surprise, as a F-badged LC is a natural progression for Lexus’ flagship coupe, which is currently offered in two flavours: a 5.0-litre V8 LC 500 and a 3.5-litre V6 hybrid LC 500h.

Kicking off this weekend in Boston, USA, the Gold Rush Rally takes participants through high profile cities and scenic back roads to be met at each stop by dedicated fans and paparazzi alike. The epic drive of over 2,700 miles (4,300 km) across the US concludes in Las Vegas on July 1.

Stay tuned for more photos of the mysterious Lexus LC.