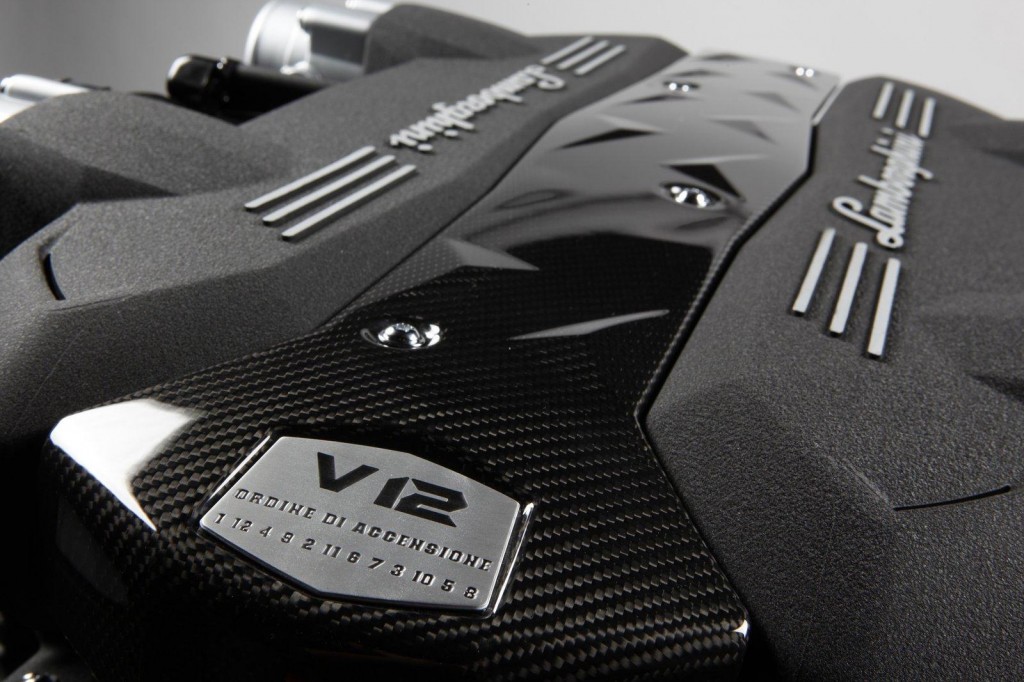 Lamborghini has finally released details of its new V12 engine that will power the upcoming Murcielago replacement supercar, first known as the Jota but recently speculated to be named Aventador.

Here is a quick run down of the specifications if you are getting too eager:

Judging from the figures, the new engine is all very impressive. Not only that it is more powerful than the old one, it is also much lighter, weighing in at a mere 234 kg. The V12 is fitted with two mufflers in a single casing, one for low volume and the other for that unmistakable high pitch Lamborghini sound.

The engine will be mated to a newly developed 7-speed transmission. Featuring a new technology called the Independent Shifting Rod (ISR), this single clutch gearbox is capable of shifting quicker than conventional dual clutch sequential gearboxes. Utilizing two independent shifting rods, as one rod disengages the current gear, the second is already engaging the next gear. The best thing is this new gearbox weights only 70 kg.

Lamborghini has also release a video showing the assembly process of the new V12 and a test run of the engine. Be sure to check out the video after the jump to listen to the engine spinning at 8000 rpm!

A milestone in the history of Lamborghini: The new twelve-cylinder and the new ISR transmission – Innovative technologies for a unique powertrain

Automobili Lamborghini is embarking on a highly innovative chapter in the company’s history with an all-new V12 power plant and a new, unique high performing transmission – the twelve-cylinder with 6.5 liter displacement, output of 525 kW (700 hp) and maximum torque of 690 Newton meters was developed with state-of-the-art technology from a clean sheet of paper. The result is a synthesis of breathtaking performance, high-revving exhilaration, low weight and moderate gas emissions. The perfect complement is a completely new transmission concept for super sports cars: the “Lamborghini ISR” automated manual gearbox combines minimal shift times and everyday usability with low weight and dimensions to guarantee that emotional sensation from gearshifts, which customers expect from a super sports car at the very top of the premier league. The new powertrain will enter production ear ly 2011.

The legend of Lamborghini strongly relies on its extraordinary, unique V12 engines.

Twelve-cylinder engines are fundamental to the legendary Lamborghini brand – in the past and in the future. The very first model by Ferruccio Lamborghini, the 350 GT, first appeared on the market in 1964 with a twelve cylinder power unit that was extremely innovative for its day. Miura, Espada, Countach, Diablo and, most recently, Murciélago are just a few of the super sports car to have been built in Sant’Agata. All of them were and will be driven by V12 engines – and all have long since taken their place in history as automotive legends.

The next milestone in this glorious history now awaits – Lamborghini’s research and development engineers started with a clean sheet of paper to create an all-new high-performance power plant. The resulting package is extremely powerful and high-revving, yet compact. At 235 kilograms, it is also extremely lightweight – with every single kilo of engine weight representing around three hp of maximum output.

Even in the world of super sports cars, 515 kW (700 hp) at 8,250 rpm sets a new benchmark. Maximum torque stands at 690 Newton meters and is available at 5,500 rpm. The extremely well-rounded torque curve, beefy pulling power in every situation, incredibly spontaneous responsiveness and, not least, the finely modulated but always highly emotional acoustics make this engine a stunning power unit of the very highest order. Not only was it developed entirely in-house by Lamborghini, it is also manufactured from start to finish at company headquarters in Sant’Agata Bolognese. Highly qualified specialists assemble the engines by hand, with every single one then tested extensively and finely calibrated on an engine test bed.

This exceptional athlete derives its power from a whole package of innovative technologies. For optimum weight, the crankcase and the four-valve cylinder heads are made from aluminum-silicon alloy. The short-stroke layout ensures exceptional high-revving performance and very low internal friction. A lengthy process of fine tuning perfected the thermal management system for the high-performance power unit, as well as the oil circulation system with dry-sump lubrication. The intake system with four individual throttle valves is highly complex – an extremely well-rounded torque curve and outstanding pulling power across the rev range the reward. The exhaust system delivers the lowest emission levels, as well as that unmistakable, spine-tingling Lamborghini sound – from a moderate rumble when cruising through the city at low revs to the howling crescendo of gears at their limits.

Engineers working under the sign of the bull have come up with an ingenious mate for the new twelve-cylinder engine in the shape of the Lamborghini ISR transmission. Overall, this is a drive unit that is absolutely unique in the competitive world of super sports cars. The development target was clearly formulated – to create the world’s most emotional gearshift feel.

This innovative manual gearbox combines extremely fast shift times – almost 50 percent shorter than with a dual-clutch transmission – with the benefits of manual shifting when it comes to low weight and compact dimensions, both always crucial for a super sports car. The low shift times are enabled through the transmission’s particular design, known as ISR (Independent Shifting Rod). Instead of taking place in series, as with a conventional gearbox, shifting can occur virtually in parallel. While one shifting rod is moving out of one gear, the second shifting rod can already engage the next. Moreover, the transmission weighs only 79 kilograms – a distinct benefit, even against comparable DSG transmissions, which are considerably heavier.