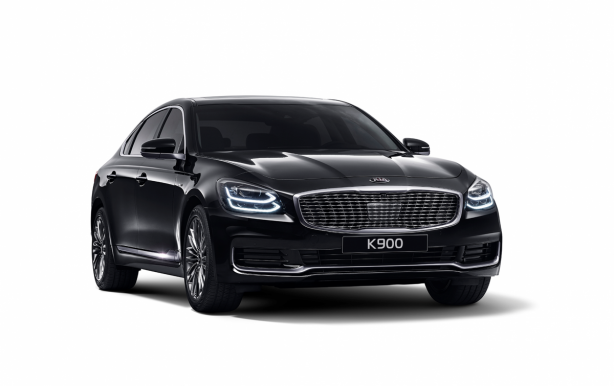 Kia has taken the wraps off its new K900 luxury sedan, which is set to take on established premium marques such as the Mercedes-Benz S-Class, BMW 7 Series and Lexus LS.

Created in collaboration between Kia’s global design headquarters in Namyang, Korea and the brand’s U.S. design studio in Irvine, California. The new model will make its world debut at the New York International Auto Show later on March 28.

Kia says the K900 introduces a modern air of elegance and gravitas to the large sedan segment by combining a beautifully balanced design with elegant, flowing lines and geometric details. Kia’s designers were inspired by the ‘Gravity of Prestige’ design concept, which exudes strength through rich detail and solid surfaces.

The new ‘Quadric pattern’ signature grille – seen for the first time today – is the focal point of the K900. Embodying the K900’s design concept, the grille contains 176 jewel-like ‘cells’, suggestive of released energy accelerating away from its centre.

Lines in the high-strength steel bodywork flow naturally from the grille, rising over the hood and, in profile, sweeping through to the rear flanks before meeting at the back.

Geometric design details add an element of modernity and technology. Said to evoke the trajectory of light, the design of the ‘Duplex’ LED headlamps provides the K900 with a visually progressive, high-prestige image.

In profile, a chrome flash adds visual depth to the smooth bodywork, running along the base of the doors and around the lower rear section of the K900. The chrome window-line adds a degree of technicality and structure to the free-flowing C-pillar before it merges with the rear deck. The taillights and exhaust housings are also finished with fine chrome details.

A key element in the design of the all-new K900 comes from its new platform and elongated proportions. Longer and wider than its predecessor, the wheelbase has been extended by 60mm (2.3 inches) to 3,105mm (122.2 inches), while both the front and rear overhangs are shorter, pushing the wheels further out to the corners of the car.

No official images for the interior has been released yet, but the interior’s minimalist layout is said to provide the driver and passengers with a peaceful retreat. 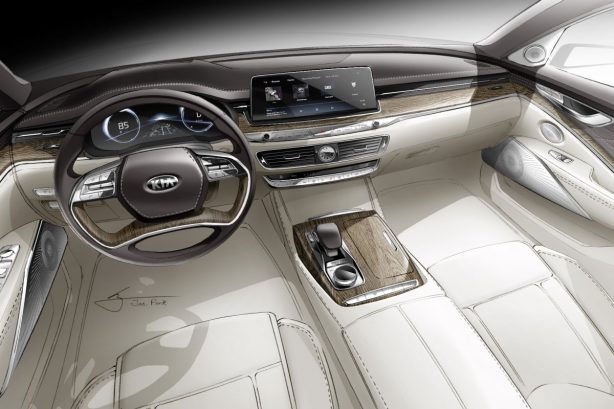 Flowing from the centre of the dash and outwards to the doors, surfaces are trimmed in a sophisticated combination of materials, with soft-touch surfaces, a blend of highly tactile wood and metal veneers, and genuine leather throughout the interior.

The K900’s 12.3-inch HMI screen has a bezel-less display and simplified switchgear layout. At the base of the center console, the driver can also use a manual dial to rotate through on-screen functions. Inspired by the simplicity of fine watch design, the K900 dashboard also houses an elegant analog clock, developed specifically for the new model by Swiss luxury watch brand, Maurice Lacroix.

The HMI features a new intelligent lighting control with proximity sensors, only illuminating the dashboard when it detects the driver’s hand reaching for a switch. Drivers can also adapt the cabin to personal preferences with a new mood lighting system.

The new K900 is said to be the first car in the world to incorporate an ambient lighting system developed in partnership with the Pantone Color Institute, the global authority on colour.

Customisable on the move, the subtle ambient lighting floods the interior in one of seven colours. Drivers can also choose from 64 unique settings to adapt light levels throughout the car.

The all-new Kia K900 will be manufactured in Korea and will go on sale across selected global markets from the second quarter of 2018. Kia Australia has no plans to introduce the model to the local market at this stage.