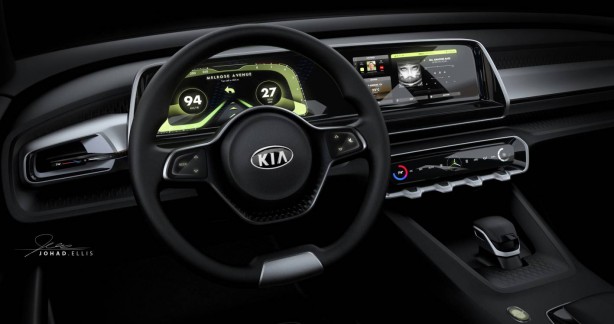 Kia has officially announced their new luxury SUV will be named the “Telluride”. The concept is set to make its world debut at next week’s International Auto Show in North America.

Along with this latest announcement, Kia has also dropped yet another teaser, this time featuring the vehicle’s ultra-modern interior. From what we can see, the dash is made up of two large displays; a large widescreen infotainment system and a second to replace the traditional analog gauge cluster. The steering wheel is a two spoke design with multi-function controls on either side and the climate control is a touch based system.

The concept will also push the “boundaries of technology and luxury with unique in-cabin health-and-wellness technology. The concept highlights Kia’s first use of 3D-printed components, which add a distinct, modern design element to the dashboard, door panels, and steering wheel”.