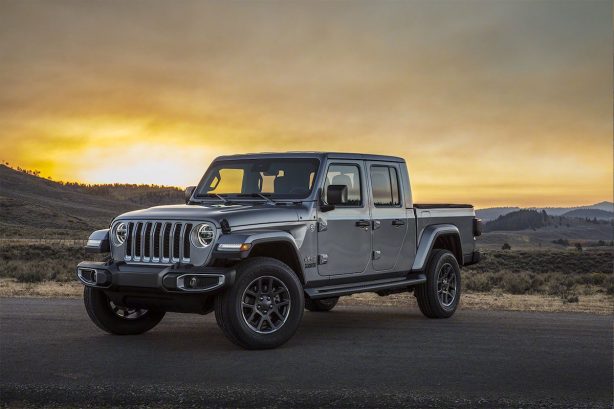 Jeep has finally unveiled its rugged Wrangler-based Gladiator ute at the 2018 Los Angeles Auto Show, ahead of its initial US launch in mid-2019.

Based upon an elongated version of the closely-related Wrangler’s chassis, the Gladiator’s 3,500mm wheelbase adds 493mm between the front and rear axles over a five-door Wrangler, while its frame is 787mm longer overall.

The Gladiator’s key differentiator – its rear tray – measures in at a very usable 1,500mm in length, and can be optionally fitted with lighting, power outlets, a spray-in bed liner, a tonneau cover, and various cargo management solutions, all of which are listed among over 200 other Jeep Performance Parts available from Mopar. 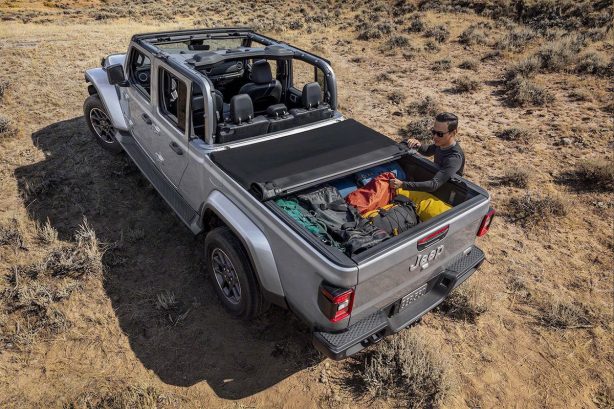 The aim is definitely on recreational users rather than tradies, however, as its payload is rated at just 725kg, although its braked towing figure of up to 3,470kg is more impressive.

Powering the big beast initially will be the 3.6-litre Pentastar V6 petrol producing 213kW and 353Nm, and comes backed by either a six-speed manual or eight-speed automatic transmission.

However, an auto-only 3.0-litre turbo diesel V6 with 194kW but a beefier 599Nm torque figure is set to be introduced during its second year in production.

Being a Jeep, all Gladiators will come with dual-range four-wheel drive as standard, although two different systems are utilised. Sport and Overland models receive the Command-Trac 4×4 system with Dana 44 axles, a 2.72:1 low-range ratio paired to a 3.73 final drive ratio, and an optional limited-slip rear differential.

Meanwhile, Rubicon models are fitted with the Rock-Trac 4×4 system, which boasts a low-range ratio of 4:1, giving it crawl ratios of 84.2:1 for the manual and 77.2:1 for the automatic. Additionally, an electrically-disconnecting sway bar, locking front and rear diffs, different suspension with improved travel and articulation, and a heavy-duty rear bumper come as standard, while a winch-ready front bumper with removable end caps can be had as an optional extra.

All three Sport, Overland, and Rubicon variants boast a 43.6 degree approach angle, 20.3 degree breakover angle, and 26 degree departure angle, along with 282mm ground clearance and a water-wading rating of 760mm.

Sharing key design elements with the Wrangler, the Gladiator also comes with a fold-down windscreen and easily removable doors, along with a variety of hard- and soft-top roof options.

On the inside, a variety of 5.0-inch, 7.0-inch, or 8.4-inch Uconnect infotainment systems can be had, the latter two offering Apple CarPlay and Android Auto compatibility, while available safety tech includes adaptive cruise control, blind-spot monitoring, rear cross-traffic alert, and roll mitigation.

While Jeep’s parent company Fiat Chrysler has confirmed the Gladiator will be heading to our shores, no official date has been set for its arrival, although its initial launch in the US is slated for the second-quarter of 2019.