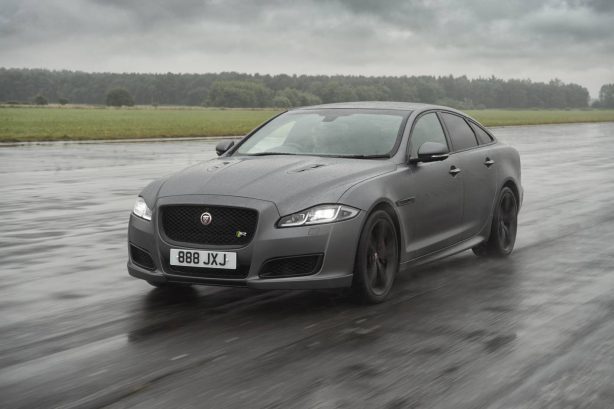 The Jaguar XJ range has gained a new performance flagship in the form of the XJR575. The most powerful XJ ever produced is powered by a 5.0-litre V8 supercharged engine, providing the large saloon with 423kW and 700Nm. Paired with an 8-speed automatic transmission, the XJR575 sprints from 0 to 100km/h in just 4.4 seconds, en route to a top speed of 300km/h.

To demonstrate the XJR’s performance, Jaguar has launched the new XJR575 with a high-speed interview starring designer Wayne Burgess being questioned by TV presenter and race driver Amanda Stretton as the performance saloon accelerates from 0-300km/h.

Lasting just 44 seconds – the time it takes Jaguar’s fastest XJ saloon to reach its top speed – Burgess gave a quick-fire insight into the development of the potent new model.

The high velocity interview was almost over before it began, but the unrelenting acceleration of the new XJ flagship did not stop Burgess, Production Studio Director and SVO Projects Director at Jaguar, from providing a unique take on the performance saloon. Watch the action in the video below.

Updated exterior badging and twin bonnet louvres mark the XJR575 out from the rest of the range, as do the red brake callipers that accompany the 20-inch Farallon gloss-black wheels. Bespoke embossed tread plates alongside intaglio and diamond-quilted seating add a final flourish to the XJR575’s interior.