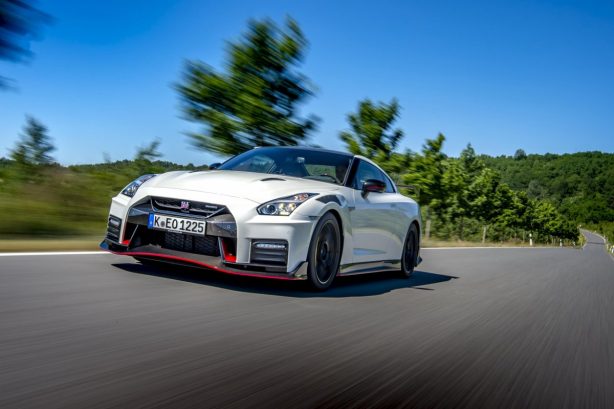 Nissan has taken the wraps of its 2020 GT-R Nismo which the company says is the culmination of two of Nissan’s most important nameplates: GT-R and Nismo.

The former is celebrating its 50th anniversary and packs a long racing pedigree and global fan following, while Nismo – which stands for NISsan Motorsports International Co. – is Nissan’s in-house tuning arm.

So what’s different with the 2020 Nissan GT-R Nismo? 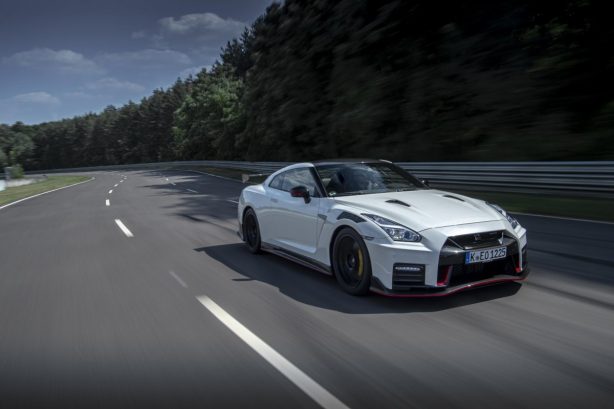 For a start, Nissan has put the car on a crash diet, shaving almost 30kg off its total weight, thanks to lighter wheels (100g lighter per corner), and carbon-fibre roof, bonnet, front fenders, side sill covers, boot and rear spoiler. The carbon-fibre parts help save 10.5kg in total.

Inside, the exclusive GT-R Nismo Recaro front seats have been enhanced to hold the driver and passenger better.

This is achieved through a three-layer structure in which carbon fibre sandwiches a main inner section to improve the way the upper body is supported. 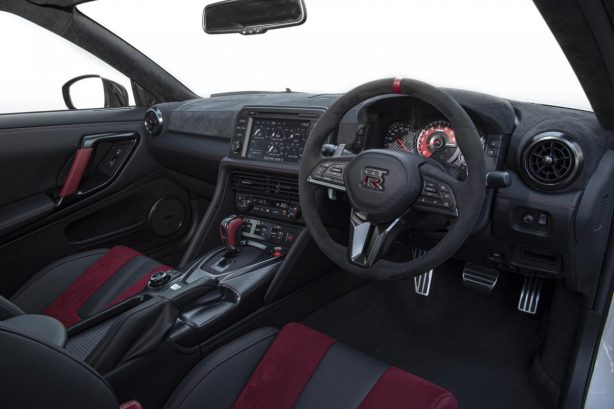 Nissan has also added a core frame structure to the carbon shell to increase the torsional rigidity of the seats (approx. 20 percent), which themselves are 1.4kg lighter.

At the heart of the 2020 GT-R Nismo is the hand-assembled VR38DETT 3.8-litre V6 with a pair of new turbochargers lifted from the GT3 racecar. They employ a 10-vane turbine wheel (one fewer vane than the current model), where the vanes are 0.3mm thinner.

This accounts for a 14.5 per cent reduction in mass, and therefore inertia (24 per cent), allowing for an increase in transient response. 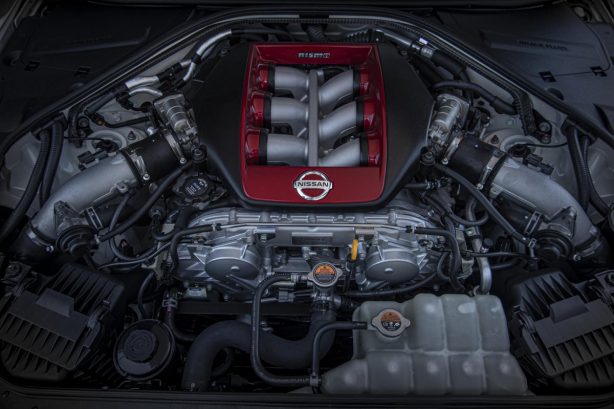 Consequently, having one less vane would reduce flow rate, so to counteract, a new back plate was created to prevent exhaust gases from flowing behind the turbine blades, drastically improving flow efficiency.

Through the latest fluid and stress analysis, special attention was given to the actual design and profile of the vanes.

Their new shape optimises efficiency with exhaust gases to boost flow rate resulting in improved boost response and acceleration as well as in gear “pickup” in any situation.

While power remains unchanged at 441kW, Nissan says the result is a sharper feeling that further enhances the overall character of the V6. 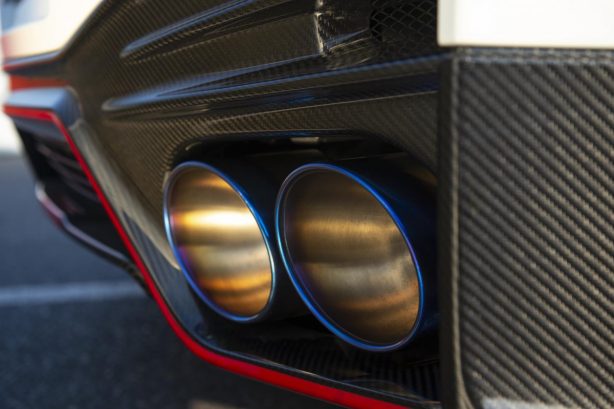 The 2020 model also scores a revised titanium exhaust system with handcrafted burnished tips and a more ‘emphatic’ tone coming through the cabin.

The tyres have also been tweaked, with the Dunlop SP Sport Maxx GT600 front treads now featuring a semi-slick pattern and a greater edge radius to improve cornering and limit understeer. The new rubber compound is said to boost grip by 7 per cent, too.

The car’s Bilstein Damp Tronic shocks have been carefully retuned in both rebound (20 per cent softer) and compression (5 per cent softer) to take into account the overall weight reduction. The revised spring rates is said to contribute to a more linear steering response and increase in road-holding ability. 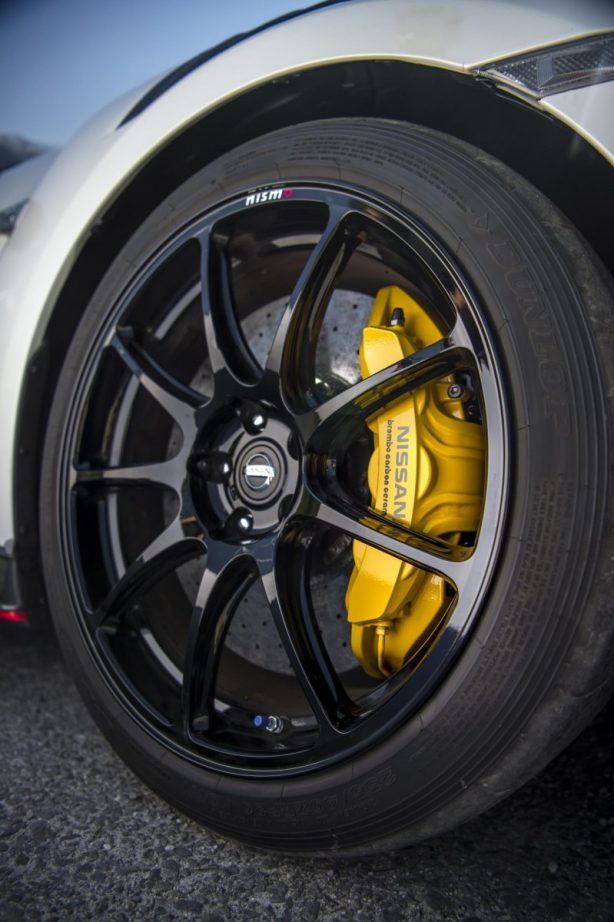 Then, there are the Brembo brakes. Special large calipers join the carbon ceramic rotors, the largest ever fitted to a Japanese performance car at 410mm at the front and 390mm at the rear.

The six-piston front and four-piston rear calipers are said to be exceptionally rigid, with all-new construction that brings a significant improvement to brake reaction time.

The biggest advantage comes from the carbon and silicon carbide structure of the rotors themselves. They allow for a 16.3 kilogram total drop in unsprung weight.

Front rotor cooling has also been improved by altering the angle in which the air guides are mounted, helping funnel a higher flow of air toward their centres.

As a final touch, the calipers have been dipped in a heat-resistant yellow paint that is not only able to endure temperatures over 1,000 degrees Celsius but is resistant to discolouring from hard use and repeated temperature cycling. 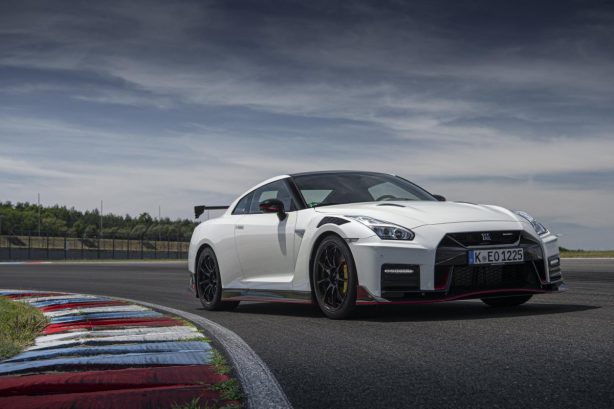 On the styling front, the 2020 GT-R Nismo features new front fenders heavily inspired by the GT3 racer with louvres that increase front downforce by 7kg without creating additional drag.

The wind tunnel-tested vented fenders also help smooth airflow along the rest of the body and avoid creating turbulence at the rear wing, promoting even greater high-speed stability.

As a multi-functional feature, they also help funnel hot pressurised air out and away from the engine bay.

Pricing for Australia is yet to be announced but given one in every five GT-Rs sold in the country is a Nismo, Nissan Australia will want to keep the new price as close to the current $299,000 plus on-road costs.