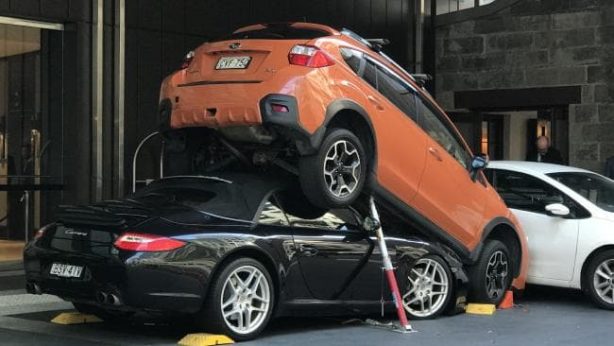 A hotel valet in Sydney has wrecked a customer’s Porsche Carrera S after driving it underneath a Subaru XV in the hotel’s driveway.

According to report, the man was trapped in the Porsche after he rear-ended the orange Subaru XV and somehow scooped it up, wedging the sports car underneath the SUV. A Kia Cerato parked in front of the XV was also damaged as the impact pushed the Subaru forward.

Rescue team had to jack up the rear of the Subaru in order to free the unlucky Hyatt Regency valet, who miraculously emerged unscathed. It is unclear how the man got himself into the predicament.

Meanwhile, a spokeswoman for the hotel said they are investigating the incident.

“We are currently undergoing a full assessment together with the local authorities and the vehicle owners on the incident,” she said.

“The staff member involved was not injured.”

“Hyatt Regency Sydney places the utmost importance on the safety of our staff and guests and a full investigation is being conducted by hotel management over the next few days,” she said.