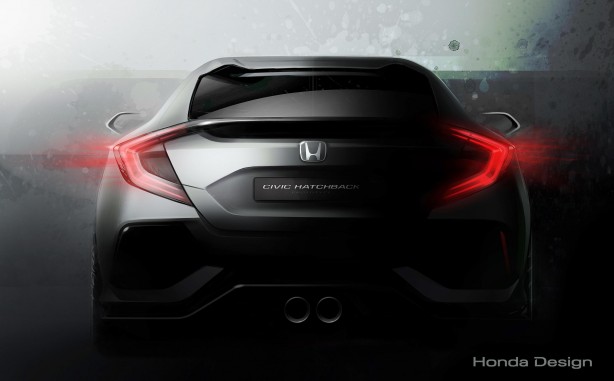 Honda is preparing to reveal its refreshed European car range at the 2016 Geneva Motor Show.

Most anticipated will be the global debut of their latest Civic Hatchback Prototype at the show. From the released sketch a few key design features can be seen; the rear window bisected by the spoiler, a hexagonal numberplate surround, spoiler blending into the tail lights, wide panels and dual, center mount exhausts.

The new hatchback is scheduled for a European launch in early 2017. Produced at Honda of the UK Manufacturing (HUM), the car will be exported to global markets.

Along with the Civic, the Jazz ‘Keenlight’ Concept will also make its debut. The new concept seeks to highlight the potential for customising Jazz, using sleek design elements, special decals and a unique color named ‘Keenlight’.

Honda also confirms the first European customer deliveries for the Honda NSX will begin in 2016. The NSX features classic low and wide proportions married to modern and alluring surfacing, an aggressive front design, and rear lights that pay homage to the original NSX. The new hybrid supercar has an all-new mid-mounted DOHC V6 engine with twin turbochargers mated to a specially-developed nine-speed DCT.