After a string of rumours, spy photos and teasers, one of the most anticipated cars of 2017 is now officially unveiled. HSV has today released full details of the GTSR W1, the most hardcore HSV ever and the most powerful car ever built in Australia.

The new W1 designation takes the iconic GTSR nameplate to its most sophisticated and powerful conclusion. A final hurrah and farewell for the Holden Commodore sedan which goes out of production this October, the GTSR W1 conveys its performance credentials with a string of race-inspired components including carbon fibre fender vents, a carbon fibre airbox, an Aeroflow Performance rear spoiler with carbon fibre upper and distinctive W1 badging.

Under the bonnet is a hand-built, 6.2-litre supercharged LS9 Generation IV V8, which HSV says is the pinnacle of the company’s 30 years of engineering heritage. This engine is fitted with titanium connecting rods and inlet valves, a dry sump oiling system, and a supercharger with twin four-lobe rotors that is claimed to pump 2.3 litres of air per revolution. The result is a mind-blowing 474kW of power and 815Nm of torque, eclipsing some of the fastest sport sedans in the world including the BMW M5 and Mercedes-AMG E63.

On hand to make the most of all that power is a close-ratio Tremec TR-6060 (MH3 spec.) 6-speed manual transmission that’s been specially designed to optimise track performance and improve driveability.

According to HSV, the GTSR W1 is as close to a supercar as it gets.

A unique W1 I.D. plate along with W1 badging on the key fob, sill plates and headrests let you know you’re stepping into something much more than a regular HSV, while 8-way electrically adjustable HSV Podium front seats finished in Alcantara with diamond-quilted stitching promises race-car-like driving position and support. Adding to the supercar feel are an Alcantara-wrapped steering wheel and gear lever designed for enhanced grip and control.

The GTSR W1 boasts a SupaShock suspension system with unique dampers that HSV says offer the lowest frictional losses of any damper readily available. The result is said to be exceptional handling that enables the car to “devour even the sharpest corners with ease”.

Adding to the GTSR W1’s performance arsenal is a set of forged 6-piston AP Racing monoblock calipers with massive 410mm front rotors to deliver the stopping power it needs. The system is said to deliver leading-edge brake modulation and pedal feel.

Along with the GTSR W1, HSV has also released details on the GTSR and GTSR Maloo. Both models are powered by a 6.2-litre Supercharged LSA Generation IV V8 that is also found in the HSV GTS, though the adoption of a new, K&N hi-flow performance air filter sees maximum power output increase to 435kW, making this the most powerful LSA V8 engine HSV has ever offered. 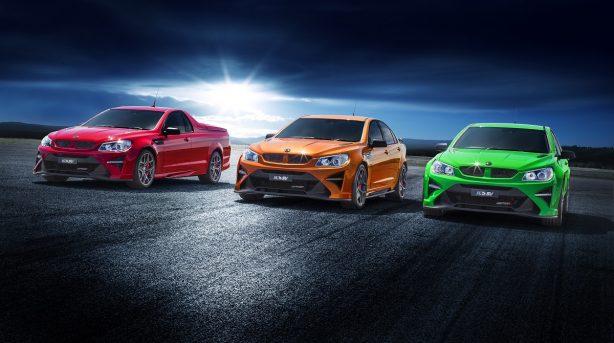 Three new colours will be available with the GTSR range – “Spitfire”, a vibrant green, “Son of a Gun”, a gunmetal grey and “Light My Fire”, a metallic, burnt orange. A tailored, high-quality car cover will also be offered with all GTSR models, individually numbered on GTSR W1.

“With the MY17 range being the last of the Zeta platform product (GEN-F range), our intentions were always to send the platform off with a bang and the content we have delivered is central to that plan”, said HSV’s Managing Director, Tim Jackson.

“The GTSR name was last used nearly 20 years ago, and as we built this range with a view towards current market expectations and trends, we couldn’t help but feel the GTSR nameplate was the logical fit for this family of product.”

“We’re confident we’ve delivered our best product ever, and the greatest performance cars ever produced in this country”, he said.

Build of the GTSR range commences in April and while all vehicles will be available in limited quantities, production of GTSR W1 will be limited to approximately 300 vehicles.

The new HSV GTSR range is available for order now.