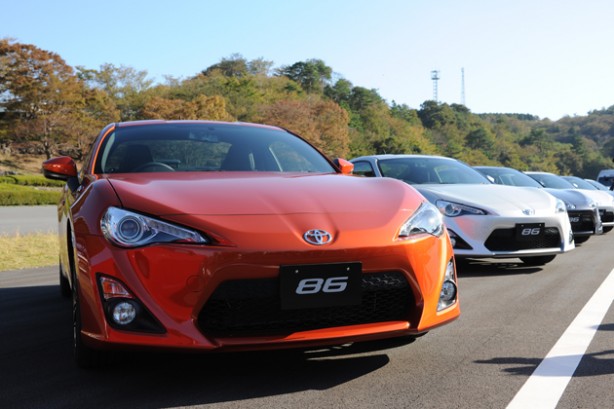 Following the launch of the Toyota 86, a group of reviewers were invited to take Toyota’s new sports coupe out for a spin at Fuji Speedway. The 86 is powered by a 2.0 liter four-cylinder boxer engine jointly developed by Toyota and Subaru. It makes 198 horsepower at 7000 rpm and 204 Nm of torque. Power is sent to the rear wheels through either a six-speed manual or six-speed automatic gearbox. The flat-four engine features a D-4S direct injection technology.

Initial response from the press was very positive. Reviewers praised its agile, direct and balanced handling. It has been a while since we last saw a fun-to-drive light weight rear-wheel drive sports car and the 86 has really revived this segment. No doubt this car will be a hot seller!

For full details of the Fuji Speedway Toyota 86 test drive, head on to AutoC-One Japan. Meanwhile, enjoy the gallery below with shots of the Toyota 86 in action.