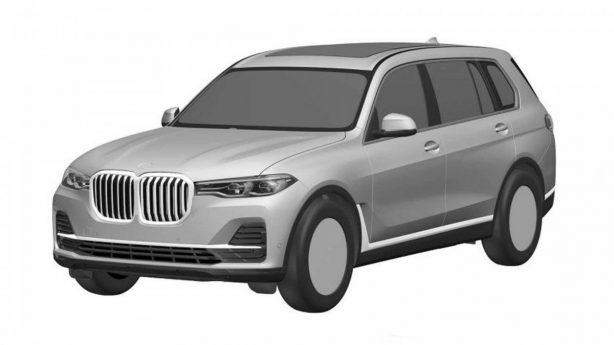 A series of leaked patent images has surfaced on the web showing the BMW X7 in all its production glory.

Leaked via Motor1.com Brazil, the images were purportedly sourced from the Instituto Nacional da Propriedade Industrial (Brazilian National Institute of Industrial Property) and show the production flagship X7 remaining true to the concept on which it is based, including the controversial front fascia with its massive grille.

Down the sides, the muscular wheel arches of the concept appear to have been toned down for production, resulting in a rather bland profile. At the back, the taillights are connected by a chrome applique, while the concept’s upwards-travelling bumper split has been dropped.

At 5,010mm, the large SUV will be offered with a seven-seat layout along with a six-seater featuring two individual seats in the second row.

On the engine front, the X7 will be powered by the latest iteration of BMW’s twin-turbo 4.4-litre V8 connected to an 8-speed automatic ZF transmission and xDrive all-wheel drive system. It will also share most of its engines with the smaller X5.

The 2019 BMW X7 is expected to be unveiled at the Los Angeles Auto Show in December.