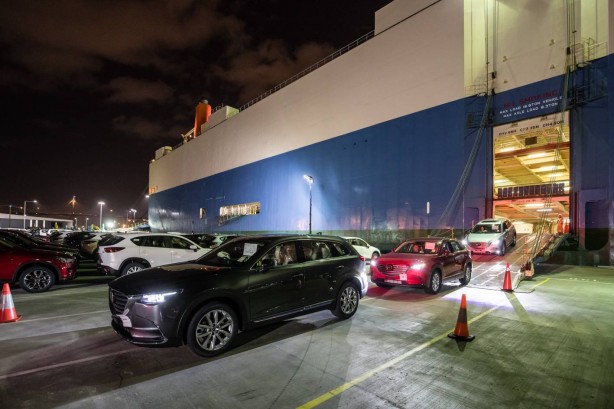 The first shipment of all-new Mazda CX-9s have arrived in Australia ahead of its July launch.

Scheduled for use at the national media launch, followed by a Mazda Dealer event, 60 vehicles docked in Melbourne late last night having been shipped direct from Japan.

Adopting Mazda’s KODO design language, the new CX-9 features a longer bonnet, swept glasshouse, crisp lines and short overhangs. At 5065mm long, the CX-9 is 30mm shorter than its predecessor, but its wheelbase has been stretched 55mm, benefiting passenger legroom as well as entry to and exit from the rear.

Housing larger wheels – 18 and 20-inch – the CX-9’s tapered fenders are pushed to the edge of its body, giving the SUV a wider stance. 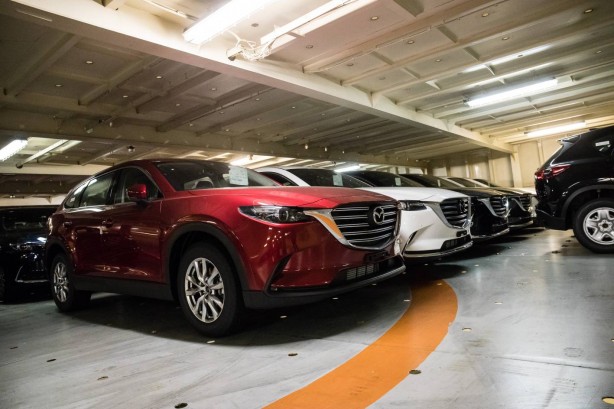 Inside, the CX-9 pushes upmarket with a premium-look interior featuring a sweeping single piece of aluminum across the dashboard, emphasizing width. In the upper grade models, the forward-angled dashboard is flanked with Auburn accents.

Buyer interest in Mazda’s flagship seven-seat family-sized SUV is at an all-time high with almost 55,000 potential purchase leads registering their interest in the vehicle, of which 13,000 want to be contacted directly by a Mazda representative.

Never has there been so much pre-launch interest in a Mazda model, with CX-9 numbers surpassing the record 34,000 leads and 9,700 priority call requests recorded for All-New Mazda MX-5 prior to its showroom debut in early-August last year.

“We had record interest in Mazda MX-5, but the response to Brand-New Mazda CX-9 has been remarkable,” said Mazda Australia marketing director Alastair Doak. “Never have we experienced such pre-launch interest in a Mazda nameplate.”

“This gives our sales team a fantastic starting platform, with the goal being to turn as many of these potential buyers into CX-9 owners.” 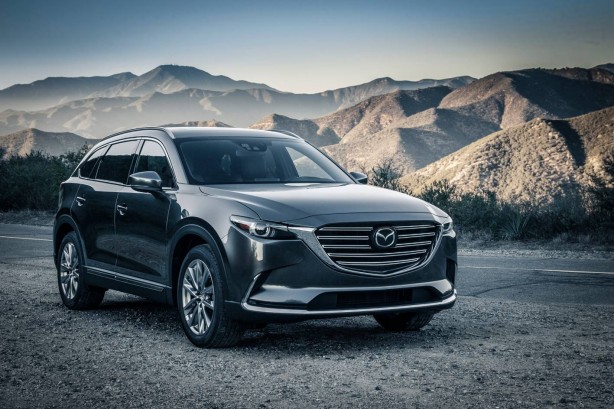 When the new Mazda CX-9 goes on sale it will be available in four grades for the first time, including the entry-level Sport, mid-grade Touring, high-spec GT and high plus grade Azami.

Available with the new generation SkyActiv 2.5-litre direct-injection turbocharged petrol engine with both i-stop and i-ELOOP technology, the CX-9 boasts fuel economy figures from a low 8.4 litres per 100 kilometres.

The new engine, with a compression ratio of 10.5:1 – one of the highest for any turbocharged engine – produces 169kW at 5000rpm and 420Nm at 2000rpm. The engine is paired with a six-speed automatic transmission.

Full pricing and specification will be announced closer to local launch.