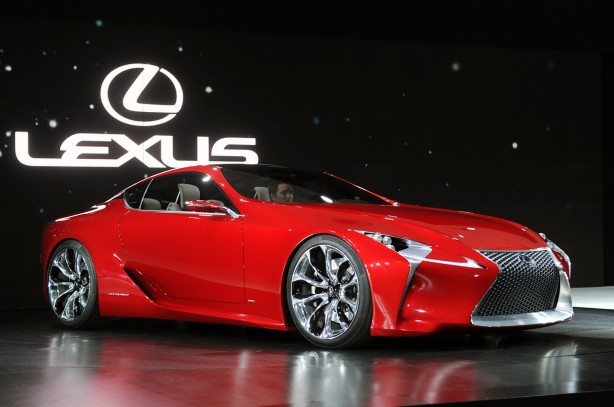 The Lexus LF-LC concept has finally breaks cover at the North American Motor Show (NAIAS) in Detroit. After weeks of anticipation drawn up by teaser images and studio photos spreading across the motoring world, Lexus have unveiled their latest creation.

The stunning hybrid supercar was designed by Lexus’ Calty design studio in Newport Beach, California. The 2+2 coupe boasts the future of Lexus design and boldly displays the new spindle grill, which we first saw in the new GS. The LF-LC design is a mix of sharp angles and elegant curves. Overall proportion is spot on.

Futuristic looks apart, Lexus claims that the LF-LC will also deliver cutting-edge driving dynamics and that the sleek coupe could “remain within reach for premium buyers”. However, Lexus remained tight lipped about what is under the hood of the new concept, stating only: “the front-engine, rear-wheel drive LF-LC features Advanced Lexus Hybrid Drive, delivering both driving performance and fuel efficiency.”

“The concept we’re showing here in Detroit continues the Lexus design revolution started with the CT and GS. The concept hybrid 2+2 liberates the idea of a sport coupe and pushes the boundaries of performance, style and technology.”

“Our entire studio worked to develop this beautiful interpretation of Lexus originality. The LF-LC concept embodies our vision of what a premium sport coupe could be.”

Although the mechanical specifications of the LF-LC remain a mystery, the incredible styling of this new supercar is no doubt something to behold. Check out the high resolution photos of the Lexus LF-LC after the jump.