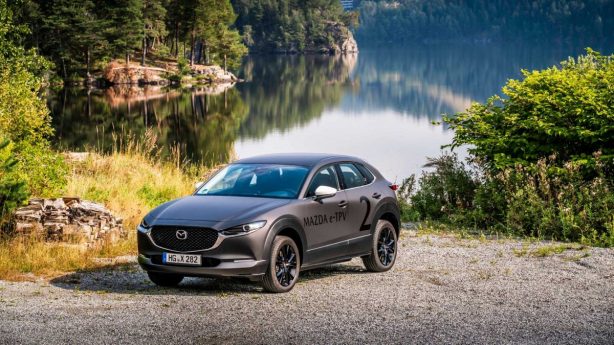 Mazda will unveil its first ever full electric vehicle at the upcoming Tokyo Motor Show in October, according to a report by Automotive News.

The EV will be revealed in concept form to gauge public interest, but the company is said to have prepared a number of working prototypes with full electric drivetrain for media test drives.

During development, the prototype used a modified body of a Mazda CX-30 to house its underpinnings (pictured). With minimal camouflage, the prototype bears the words “Mazda e-TPV” on its side which stand for Mazda Electric Technology Prove-Out Vehicle.

Despite the use of the CX-30 body, Mazda says the prototype has no relation to the CX-30 production crossover and that the concept taking the stage in Tokyo will be a “completely new model”.

The EV will reportedly pair an 35.5 kilowatt-hour battery with an electric motor that is able to deliver 105 kW of power and 264 Nm of torque.

There will also be a range extender version which adds a small rotary engine to charge the battery for extra range. This model will target markets where longer travel distance is required such as North America.

The EV will be the first of a series of electrified vehicle to come from Mazda as part of the company’s plan to gradually electrify its line-up. When launched, it will most likely compete with the Hyundai Kona electric.