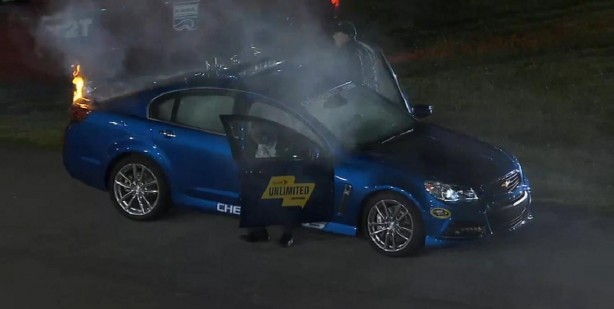 A Holden Commodore SSV Redline-based Chevrolet SS used as a pace car at the NASCAR race in Daytona Beach, Florida has caught fire while on duty.

It was leading the field before the final leg of the season-opening Sprint Unlimited exhibition race when it caught fire. The fire appears to have started from the back of the sports sedan before filling the cabin with smoke.

Pace car driver, Brett Bodine and his co-driver, quickly pulled over and dash to safety. Rescue crews wasted no time in getting to the ill-fated metallic blue pace car to put out the fire. It is unknown at this stage what caused the fire in the Australian-made Chevy, but whatever it is, it won’t do GM’s or for that matter, Holden’s reputation any good.

As for the race, organisers brought out a replacement pace car to complete the race.