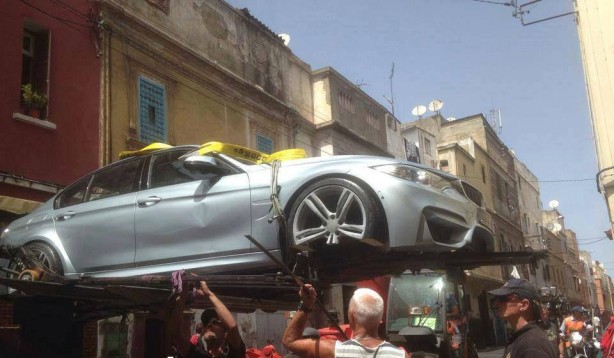 Hollywood superstar Tom Cruise, who has arrived in Morocco for the fifth installment of Mission Impossible 5, was seen in the Derb Sultan neighborhood in Casablanca.

The upmarket suburb was used as a set for one of the car chase scenes in the upcoming action thriller. And the chosen candidate for the action was the 2014 BMW M3.

The ‘behind the scenes’ footage was captured in an amateur video and posted on YouTube. The M3 was given the most scrutinising suspension test when it was driven down multiple flock of stairs at high speed, turning the narrow streets of the old medina of Casablanca into a scene of screeching tyres and roaring engine.

The BMW M3 and its coupe sibling, the M4, is powered by a high-revving six-cylinder in-line engine that develops 317 kW of power and 550 Nm of torque. Driving the rear wheels through the third generation seven-speed M double clutch transmission with launch control, both the M3 Sedan and M4 Coupé cover the sprint from 0 to 100 km/h in 4.1 seconds.

Check out the Mission Impossible 5 car chase below.