For the 2016 Paris Motor Show the attention will be on the new lukewarm Giulia all-wheel-drive at the Alfa Romeo stand. On display will be two new Alfa Romeo Giulia Veloce in two flavours, a Blue Misano 280hp (208kW) 2.0 Turbo Petrol car which will be accompanied by a Silverstone Grey 210hp (156kW) 2.2 Turbo Diesel. The power of both engine types is sent by an 8 speed automatic transmission to all 4 wheels as part of the Q4 all-wheel drive system.

The Alfa Romeo Giulia will be unveiled in 5 different guises for the European market, with two new Veloce incarnations, two Super versions and the high performance Quadrifoglio. Also to be unveiled at the Paris Motor Show by Alfa Romeo will be the new Giulietta Veloce and Mito Veloce, the gorgeous Alfa 4c will also be on show in both Coupe and Spider iterations.

Two engine power-plants are available, the more powerful 2.0 Turbo Petrol will produce 280hp (208kW) at 5250 rpm with 400Nm torque at 2250rpm, these figures are achieved thanks to the engines MultiAir electro-hydraulic valve activation system, “2-in-1” turbocharger system and direct injection with a 200bar high pressure delivery system.

The 2.2 Turbo Diesel produces 210hp (156kW) at 3500rpm and 470Nm of torque at only 1750rpm. This is the first entirely aluminium diesel engine ever built by Alfa Romeo and it too has a number of technological advances to help achieve the power and torque output. MultiJet II technology, injection rate shaping (IRS) and an electronically operated variable geometry turbocharger all work together to reduce response times and increase efficiency. 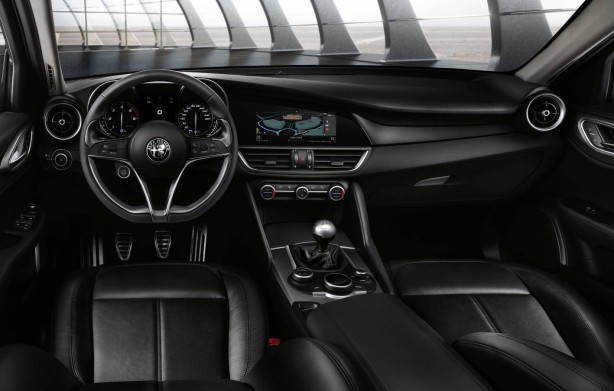 From 2017 the AE – Advanced Efficiency – version of the Giulia will also be available in Super trim fitted with a 180hp (134kW) 2.2 diesel. a 4.2L/100km economy rating is achieved in tandem with a low pressure EGR valve, air to water intercooler, secondary engine cooling unit, optimised gearbox ratios, a body height reduction of 5mm, specifically designed alloy rims fitted with low rolling resistance tyres and an overall 0.23 coefficient of drag. Even with an emphasis on efficiency the AE will still hit 230kmh and clock 100kmh in 7.2 seconds.

Simultaneous to the unveiling of the Giulia Veloce will also be Alfa Romeo’s Q4 all-wheel drive system, designed to improve vehicle traction in real time and increase levels of performance, efficiency and safety. The Q4 system includes an active transfer case and a front differential to allow a 60% torque split to the front wheels. Under ordinary conditions the system is primarily rear wheel drive with all the power being directed to the rear wheels, the system can recognise and anticipate situations where more grip is necessary and divert some power to the front axle in real time.

Fiat Chrysler Australia has confirmed the Alfa Romeo Giulia was headed for Australia. Local pricing and specification will be announced closer to local launch in 2017.