Hyundai has today unveiled the all-new Genesis premium sedan in South Korea. With already 3,500 orders in its home country, Hyundai targets to sell 62,000 units globally next year, 32,000 units in Korea and 30,000 units overseas.

“The all-new Genesis is a concentration of Hyundai Motor’s most advanced technologies, reborn through relentless performance tests and thorough quality management. The all-new Genesis will compete head-on with top-tier premium models in the global market including Europe, home to many such premium brands, to enhance Hyundai’s brand values and gain leadership in the industry,” said Mong-Koo Chung, Chairman and CEO of Hyundai Motor Company, during his welcoming remarks. “Hyundai Motor has made great strides over the past half-century through constant innovation. We will continue to satisfy customers with even better quality vehicles.” 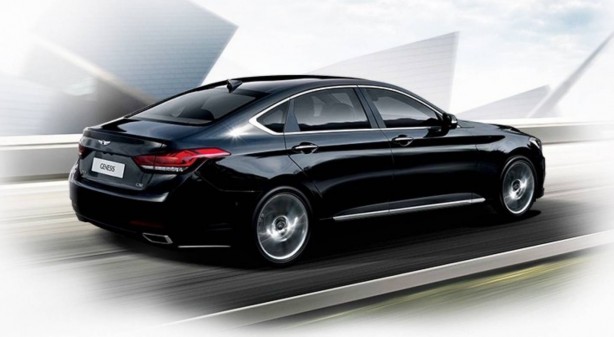 The all-new Genesis is the result of over four years of development and an investment of approximately 500 billion Won (KRW). Following its launch in Korea, the all-new Genesis will be introduced in major markets next year.

The luxury sedan features an overall length of 4,990mm, overall width of 1,890mm and overall height of 1,480mm. In particular, its wheelbase was extended 75mm to 3,010mm compared to its predecessor, boasting best-in-class cabin space.

Following the introduction of the original Genesis in 2009, Hyundai’s design philosophy of ‘Fluidic Sculpture’ has been developed further — all-new Genesis is the first model to showcase Fluidic Sculpture 2.0.  This concept boasts a core central theme: simple and harmonious design with refined fluidic elements. The design features the modern Hyundai look, with the company’s now familiar hexagonal front grille and a dynamic character line running along the flanks of the car, and a sporty rear end design. 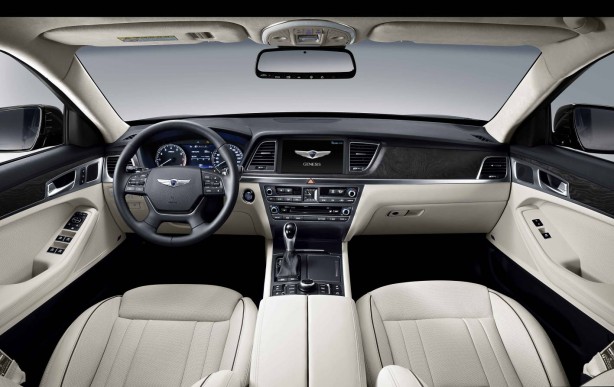 According to Hyundai, incorporating new first-in-class technologies has been a key goal in the development of the all-new Genesis.  The model includes several world- and Hyundai-firsts for a car in its sector, aimed at demonstrating Hyundai’s technological expertise and positioning the brand as a credible producer of premium vehicles. Among these advances are the new CO2 cabin sensor control, and safety features such as Automatic Emergency Braking (AEB).

The debut of the new HTRAC All-Wheel-Drive system and new multi-link rear suspension is one of the biggest differences between the original Genesis and all-new Genesis.  Aimed at providing improved traction and stability, the HTRAC system was tested through extensive sub-zero and hot weather programs on road and track. All four V6 and V8 petrol engines available with the all-new Genesis have also been refined for better driving performance.

The original Genesis model has sold around 250,000 units globally over a six-year period since its debut, playing an important role in the rapid evolution of the Hyundai brand by entering the premium sedan sector.

The all-new Genesis, like its predecessor, will be aimed primarily at consumers in the Korean, North American, Middle East and Chinese markets. In addition, the all-new Genesis will enter the European markets and Russia for the first time.

Targeting existing Genesis owners and new mid-luxury customers, the all-new Genesis recognizes a general shift away from customers choosing highly-priced, brand-oriented vehicles. The all-new Genesis is aimed at those desiring high-tech products that improve their own personal sense of value, while emphasizing distinctive style and dynamic driving performance.