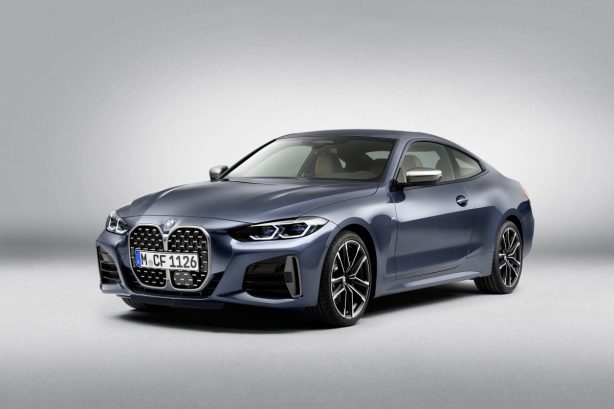 After a string of spy shots, teasers and renderings, the all-new BMW 4 Series Coupe is finally here. Unveiled via live webcast today, the 4 Series Coupe is headlined by its expressive design – most notably the new enlarged BMW kidney grille – and under-the-skin revisions to advance its dynamic potential.


Unlike 4 Series models of the past, the new model looks dramatically different to the 3 Series sedan on which it is based. According to BMW, the striking front end of the new 4 Series Coupe “shines the spotlight on its standalone character and provides significant presence”.

From the front, the large, vertically emphasised BMW kidney grille is unmistakable. It angles forwards and extends down almost to the lower edge of the front bumper. A horizontal mesh structure, similar to what has appeared on other recent BMW M series models, features within the kidney grille. 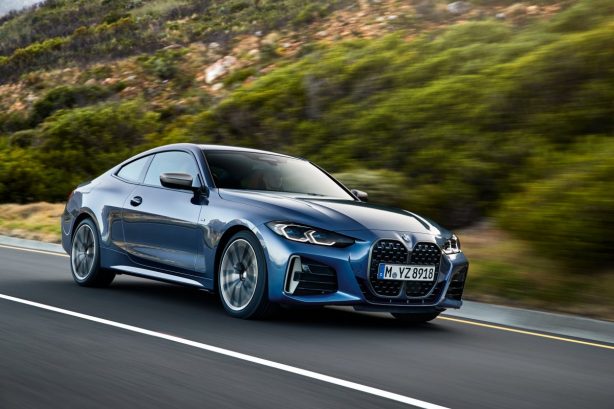 Flanking the bold new grille, the slim headlights of the new BMW 4 Series Coupé reach well into the front wheel arches. Full-LED headlights with high beam assistant are fitted as standard, while adaptive LED headlights with BMW Laserlight are available as an option.

Down the side of the coupe, the flanks are shaped by tautly carved surfaces, while short overhangs, slender pillars, long doors with frameless windows, and a flowing roofline accentuate its elegant appearance.

Like the front end, the rear has been completely redesigned with distinct surfaces and a pair of slim and darkened full-LED rear lights. 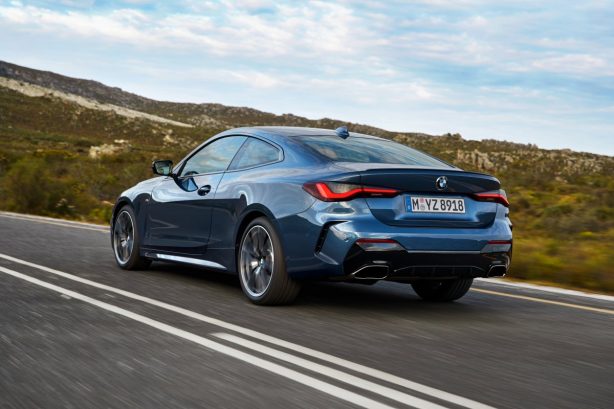 As with most BMW models, 4 Series customers can opt for the M Sport Package which brings sportier front and rear bumpers, M Sport suspension, 19-inch M light alloy wheels, knee pads on the sides of the centre console and other exclusive M Sport interior elements.

Exterior accents in Cerium Grey form a further identifying feature of BMW M440i xDrive while an M Carbon exterior package can also be optioned to add a motorsport-inspired aesthetic.

Its tracks have increased in width over its predecessor – by 28mm at the front and 18mm at the rear – and are also 23mm wider than those of the 3 Series sedan.

In contrast with the exterior, the interior is largely carried over from the 3 Series. The interior design is characterised by cleanly designed surfaces, high-quality materials and a driver-focused cockpit.

Sport seats and a newly designed M leather steering wheel come as standard, as does the standard acoustic glass for the windscreen which further improves comfort over long distances.

Being a 2 + 2 coupe, the 4 Series features a pair of individual rear seats to accommodate two passengers. 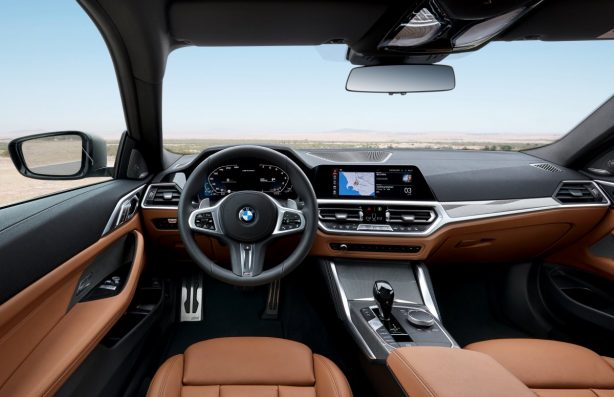 BMW Live Cockpit Professional is standard on all 4 Series variants and features a fully digital screen grouping comprising a digital instrument cluster behind the steering wheel with a screen diagonal of 12.3 inches and a 10.25-inch control display.

The BMW Head-Up Display is also fitted as standard to provide driving information directly in the field of view of the driver.

A range of engine variants incorporating enhanced BMW TwinPower turbo technology will be available to Australian customers when the new 4 Series Coupé arrives Down Under this October.

All three powerplants are matched with an eight-speed Steptronic Sport transmission which can be controlled by steering wheel-mounted shift paddles.

The all-new BMW 4 Series Coupé in 420i, 430i and M440i xDrive variants will go on sale in Australia this October with pricing and specification details to be announced prior to launch.