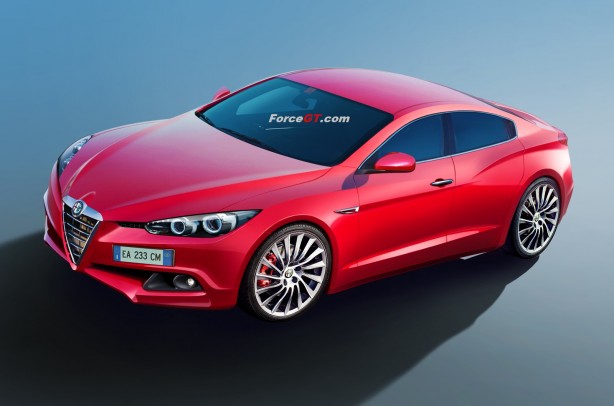 Alfa Romeo is readying a BMW 3-Series rival called the Guilia internally. Although the internal code name may not make it to production, Alfa’s latest sedan is in the final stages of being signed off for a 2014 launch.

Spearheaded by Fiat Group boss, Sergio Marchionne, the Guilia carries the heavy burden of the company’s revival plan. Together with the mid-engine 4C sports car, also due in 2014, and the reborn Spider, which is due in 2015, Sergio is determined to turn Alfa into a global premium brand.

The Guilia will utilise the third generation version of the Guilietta’s sophisticated ‘Compact’ platform. Fiat says 90 percent of the platform is constructed of high-strength materials, such as the cast aluminium ‘shear plate’ that braces the front chassis legs. The result is greater rigidity for better steering and suspension control. The platform will be wider and has a longer wheelbase in the Guilia, compared to the second generation version found under the Guilietta, which is currently shared with the Dodge Dart and the Chinese market Fiat Viaggio.

The entry level model is set to be powered by a 1.4-litre MultiAir engine generating 90kW (120hp/122PS). Chrysler’s (now owned by Fiat) latest Pentastar petrol V6, albeit with the addition of MultiAir, will also see duty in the Guilia.

The car will be front-wheel drive, while a four-wheel drive option will also be available. The latter is essential if Alfa was to successfully relaunch itself in North America.

The Guilia sedan will be joined by a Sportwagon soon after launch. Prices are expected to start at around £22,000 in Europe.