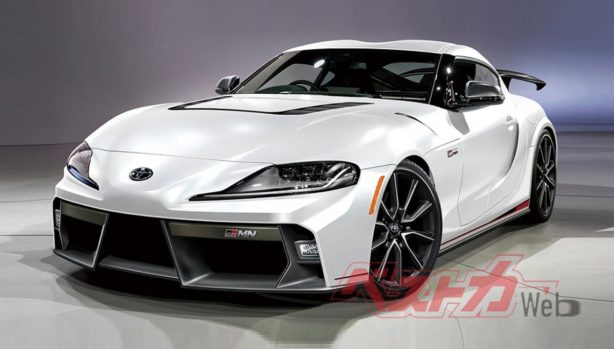 It’s no secret that Toyota is cooking up a hotter version of the GR Supra. Having confirmed earlier this year that a limited edition model of the GR Supra will launch as the new top dog, Toyota has been so far sticking to its words of keeping the reborn sports car fresh every year with new variants.

The hardcore GR Supra is expected to wear the GRMN moniker, which stands for Gazoo Racing Meister of Nürburgring. Slated to bow in 2021, the Supra GRMN is speculated to get the S55 3.0-litre twin-turbo in-line six engine currently used in the BMW M2, M3 and M4.

The full-blown M engine will bring over 300kW and at least 550Nm to the two-seater coupe, a stepped jump from the B58 3.0-litre single twin-scroll turbo mill found in the existing car.

With the GR Supra capable of sprinting from 0 to 100km/h in 4.3 seconds, expect the Supra GRMN to shave around two-tenths of a second off that time to stop the clock in 4.1 seconds.

The Supra GRMN will also likely be put on a strict diet, shedding weight through the use of carbon fibre components. There will be extra body strengthening to make the special edition model stiffer than the standard car, along with an upgraded suspension to cope with the extra power.

While we have so far yet to see official images of the upcoming Supra GRMN, Japanese publication Best Car Web is giving us a glimpse of what to expect with this hot rendering. It features a beefed up front bumper, side skirts, bonnet vents and a rear wing spoiler.

We like what we see here, but we can’t wait to see the final product.