The all-new second generation Lexus NX has been officially unveiled, bringing an evolutionary design, a range of new powertrains and a next-generation multimedia system.

The NX is a Lexus core model, and so the Japanese luxury marque has played it safe with the styling of the new 2022 Lexus NX. The renewed proportions are more athletic than before, with the medium SUV having grown 20mm longer and wider but just 5mm taller. The new dimensions lend the NX a wider and sleeker stance.

The front design is characterised by the latest interpretation of the Lexus spindle grille, with it adopting a more edgy and angular design. The day time running lights are now incorporated into the main headlamps, following in the foot steps of the latest Lexus IS sports sedan.

Strong shoulder line and sharp creases cut into the sculpted side body panels, while a new taillight design that stretches the width of the tailgate highlights the new rear end styling. 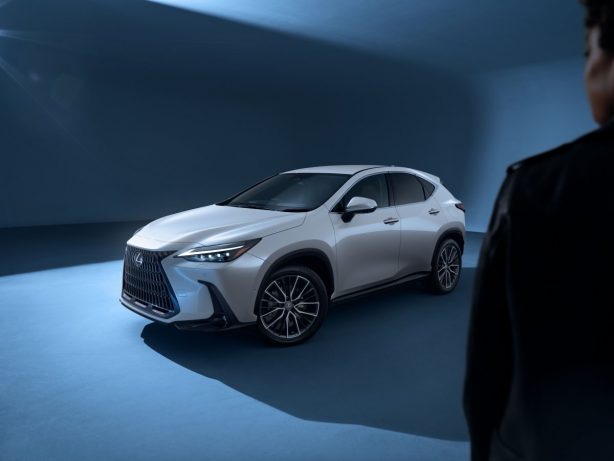 With a 20mm longer wheelbase, the all-new NX is said to define the next-generation Lexus design language by pursuing “simplicity rooted in strong proportions and expressing captivating forms”. Overall, the new Lexus NX is a handsome-looking mid-size luxury SUV.

In sharp contrast to the evolutionary exterior styling, the interior of the new Lexus NX has been completely revamped. Inspired by the Tazuna Concept – a cockpit concept that allows the driver to intuitively connect with the car and concentrate more on driving operations, the new interior blends a smooth flowing dashboard design with a rich and luxurious fuse of tones and textures. 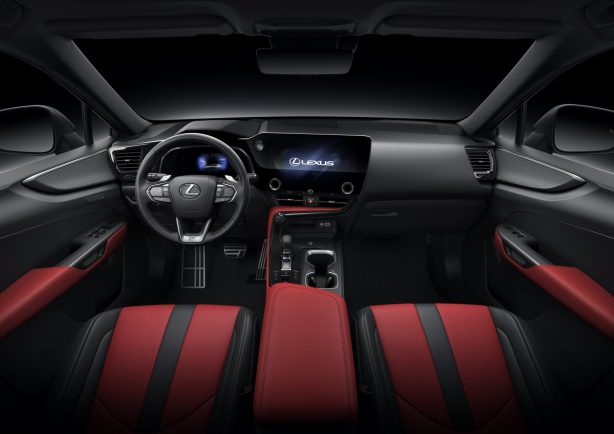 Making first application in a Lexus is the new next-generation 14.0-inch widescreen, touch-display. It makes first use of an antireflective coating applied to the windshield and glare-reducing bonding technology for higher clarity under all conditions.

The new Lexus infotainment also debuts a new activating function by saying a pre-defined activation word such as “Hey Lexus!”. The system can be activated by voice recognition without having to operate switches or stop playing music. 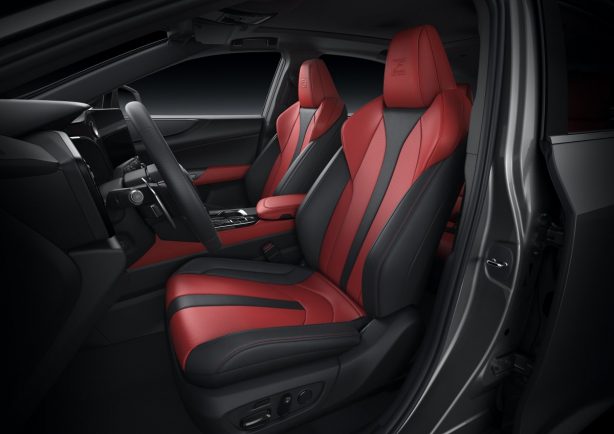 The Lexus Premium Sound System consists of 10 speakers, including a subwoofer. An available Mark Levinson Premium Surround Sound System delivers 17-speaker audio, including a large-capacity subwoofer box that utilises the body frame, and are optimally placed to create a stage feeling that extends from front to back and left to right.

In terms of added safety, a Lexus-first E-Latch system electronically controls the latching and unlatching of doors, combining with a blind-spot monitor to provide a Lexus-first safe exit assist (SEA) function that helps prevent accidents caused by door operation when the vehicle is stopped.

A three-tier line-up comprising NX 350h, NX 350 and NX 250 will arrive in Australia in November, 2021 – the same month as the arrival of the first Lexus battery electric vehicle (BEV), the UX 300e luxury compact SUV.

The all-new NX will also become the first Lexus plug-in hybrid electric vehicle (PHEV), and further details will be communicated about the NX 450h+ in due course.

The NX hybrid electric vehicle (HEV) uses a 2.5-litre petrol engine, combined with a high-output electric motor and Lithium-ion battery pack. While FWD will be available, the AWD system E-Four has a constantly variable front/rear driving force distribution from 100:0 to 20:80 percent modes.

The newly developed Direct Shift eight-speed automatic transmission has been optimised for the turbocharged engine, which is also matched with an all-new electronically controlled full-time AWD system. The AWD constantly varies the front/rear driving force distribution from 75:25 to 50:50 front/rear depending on the situation.

An efficient 2.5-litre petrol engine and Direct Shift eight-speed automatic are delivered in the lightest NX. The transmission uses the same unique control technology and optimised final gear ratio as the 2.4-litre turbocharged engine, only with FWD.

Full technical details of the all-new 2022 Lexus NX will be announced closer to local launch.