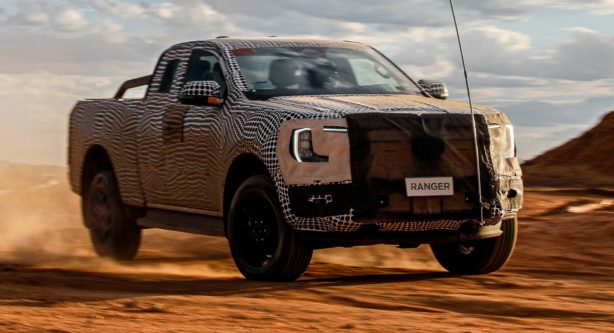 With the next-generation Ford Ranger inching closer to its late 2021 market launch, Ford has released a teaser video of the highly anticipated and popular ute showcasing the model being off-road tested in a variety of terrains, including gravel, sand, rocks and snow.

Like the current-generation, the new Ranger is designed and engineered in Australia for the global market, with Ford claiming the new model will have “superior off-road credentials paired with dynamic driving DNA”, as well as being “the toughest, most capable, most connected and most versatile Ranger yet”; the latter no doubt hinting at the hi-tech features inside the car.

Despite the heavy camouflage, it’s clear the next-gen model will favour the more truck-like face of the F-150, with larger and vertically-arranged LED headlights, a larger grille and muscular wheel arches.

Sitting on an upgraded version of the T6 ladder-frame platform which will also underpin the next Volkswagen Amarok, the new model will be the first Ranger to be offered with a plug-in hybrid variant. Rumours suggest a 2.3-litre EcoBoost married to an electric motor for a combined output of 270kW (362hp/367PS), along with a decent-sized battery for a reasonable EV only range.