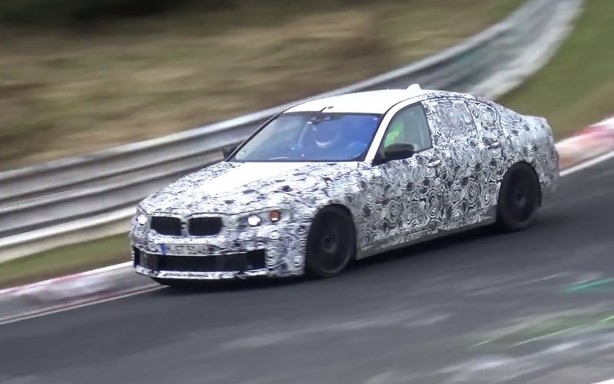 Looking faster than ever, BMW’s F90 M5 has been spied in full camo testing at the legendary Nurburgring race track.

Details are scarce on the new M5, however, it will most likely feature an upgraded 4.4-litre twin turbo V8 engine churning out around 460kW of power.

A first for the super saloon, it will be offered with an all new xDrive all-wheel-drive system designed to optimise traction and make it a direct competitor to the next Mercedes-AMG E63; also slated to feature AWD.

It’s still unknown whether the M5’s AWD system will be full or part-time, although going by how the tail occasionally gets loose, it appears as though the system is far from production ready.

BMW are also aiming to make the M5 around 100kg lighter than the current model.

The update won’t stop with performance, either, with BMW likely to bring semi-autonomous driving, along with the next-generation iDrive as found on the latest BMW 7-series to the next M5.